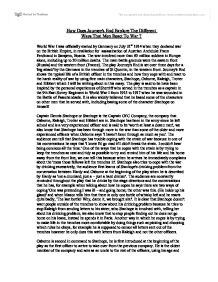 How Does Journey's End Explore The Different Ways That Men React To War ?

How Does Journey's End Explore The Different Ways That Men React To War ? World War I was officially started by Germany on July 31st 1914 when they declared war on the British Empire, in retaliation for assassination of Austrian Archduke Franz Ferdinand in Sarajevo, Bosnia. The war involved more than 60 million soldiers in Europe alone, including up to 20 million deaths. The main battle grounds were the eastern front (Russia) and the western front (France). The play Journey's End is set over three days for a 'big attack' by the Germans in the trenches of St Quentin, in the western front. Journey's End shows the typical life of a British officer in the trenches and how they cope with and react to the harsh reality of war by using five main characters, Stanhope, Osborne, Raleigh, Trotter and Hibbert which I will be writing about in this essay. The play is said to be have been inspired by the personal experiences of Sherriff who served in the trenches as a captain in the 9th East Surrey Regiment in World War I from 1915 to 1917 when he was wounded in the Battle of Passchendaele. It is also widely believed that he based some of the characters on other men that he served with, including basing some of the character Stanhope on himself. ...read more.

Another example of this is when he is talking with Trotter and they talk about how it is a "wonderful morning" even though they are in trenches that have previously been described as a "blasted mess" and smelling "like cess-pits". Raleigh is the newest and youngest of the five officers in the company, he has come straight from school and is very inexperienced but very eager to serve his country on the front line. The audience finds out that Raleigh knows Stanhope from school and that Stanhope was his hero while he was at school, the audience also finds out that Raleigh has a high ranking relative able to get him into the company because he still looks up to Stanhope. When Raleigh first arrives in the trenches he doesn't deal with the stress of war because he has no knowledge of what to expect and admits to thinking that there is something 'romantic' about war. Raleigh continues to have a positive outlook on the war and in one of his conversations with Osborne describes the Germans as being "really quite decent" until the point of the raid where he and Osborne consider the possibility that one or both of them might die in the raid. After the raid Raleigh starts to develop his own ways of coping and starts to try and become more friendly towards the other soldiers in ...read more.

R.C Sherriff shows the audience that the reality of war is very harsh and unexpected things can happen at any time to anyone and that life on the front line is very different to anything that they can experience away from the front line. This is most effectively demonstrated through Raleigh and in the ways that his impression of war changes over a short period. He also shows that living in the trenches can affect even the most experienced soldiers like Stanhope and Osborne as well as showing that in some way everyone is affected by war. Journey's End shows that those who are involved in a war have many different ways of dealing with it and that some of the methods work better than others and actually help soldiers cope like Osborne's reminiscing about the past helps him cope but Hibbert's neuralgia doesn't. The whole play gives the audience the impression that war and the front line is a very bad place to be, and because the play is inspired by Sherriff's experiences, that he does not like war and that no one should be forced to fight, not only because of the effects on the enemy and the area that the fighting takes place in but because of the effects on the allied troops who do not deserve to be injured or killed for fighting for justice. ...read more.