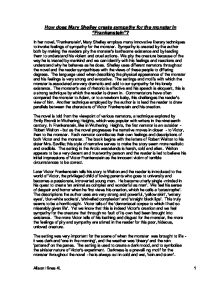 How does Mary Shelley create sympathy for the monster in &quot;Frankenstein&quot;?

How does Mary Shelley create sympathy for the monster in "Frankenstein"? In her novel, 'Frankenstein', Mary Shelley employs many innovative literary techniques to invoke feelings of sympathy for the monster. Sympathy is created by the author both by making the readers pity the monster's loathsome existence and by leading them to understand his violent and cruel actions. We pity the creature because of the way he is treated by mankind and we can identify with his feelings and reactions and understand why he behaves as he does. Shelley uses different narrators throughout the novel and the reader sympathises with the views of these people to differing degrees. The language used when describing the physical appearance of the monster and his feelings is very strong and evocative. The settings and motifs with which the monster is associated are very dramatic and add to our sympathy for his lonely existence. The monster's use of rhetoric is effective and his speech is eloquent, this is a strong technique by which the reader is drawn in. Commentators have often compared the monster to Adam, or to a newborn baby, this challenges the reader's view of him. Another technique employed by the author is to lead the reader to draw parallels between the characters of Victor Frankenstein and his creation. The novel is told from the viewpoint of various narrators, a technique explored by Emily Bront� in Wuthering Heights, which was popular with writers in the nineteenth century. In Frankenstein, like in Wuthering Heights, the first narrator is an outsider - Robert Walton - but as the novel progresses the narrative moves in closer - to Victor, then to the monster. ...read more.

The monster becomes very fond of the family he is watching and feels guilty that he has taken their meagre supply of food. He loves the way they behave towards one another, their beautiful appearance, their harmony and the old man's glorious music, 'I longed to join them, but dared not.' His pleasure at hearing De Lacey's music and his sorrow at the family's distress reveal him to be a creature of beautiful feelings and natural sympathies. The monster's pity for the De Laceys reflects our pity for the monster. Our sympathies are increased when the creature views his own image in a pool; he is horrified and is, 'filled with the bitterest sensations of despondence and mortification.' The monster's story takes another turn when the De Laceys are visited by an Arabian lady. When Felix teaches the visitor their language the monster also acquires language. When Felix reads from 'Ruins of Empires', his natural goodness is shown by the way he turns away with 'disgust' at the deeds of 'bloodshed' described in the book. He begins to develop his knowledge of society and his question, 'What was I?' reveals a growing awareness of his own difference. The welcome given to Safie highlights the feelings of rejection the monster has experienced from all men so far. Now that the monster has learned to read, he can decipher the papers in his pocket. They are Victor's laboratory notes and tell of his 'accursed origin'. It becomes very obvious that Victor loathed his creation and rejected it completely; this passage powerfully describes the raw emotions felt by the monster. After this follows a period of deep despondency with which we are able to identify. ...read more.

This speech is almost poetic in its eloquence, the words powerfully stirring our compassion for this sad creature. He no longer desires to live,' polluted by crimes and torn by the bitterest remorse, where can I find rest but in death? ' As he jumps from the window into the darkness, the reader is left to wonder what will become of him. Is the darkness and extreme cold a metaphor for the 'hell' he is now entering? Mary Shelley has enabled the reader to feel great sympathy with Frankenstein's monster. This was a creature who at first only desired acceptance from his 'master' but received loathing, hatred, and utter rejection. His change from an innocent being into a vengeful beast, we feel is the direct result of mankind's prejudice and cruelty towards him. The concept that people should not be judged by their appearance was a radical idea for the period that Mary Shelley was writing in - challenging the social conventions of the time. Parallels are drawn between the anguish of the monster and the grief felt by Victor Frankenstein. These strong emotions are portrayed against some of the harshest, most desolate scenery in the world. The contrast between these settings and the warm and pleasant scenes when Victor is with his friends and family only serve to emphasise the monster's loneliness and isolation. Images of light and dark, heaven and hell, warmth and cold, fire and ice, high and low, joy and despair can be traced throughout the novel. All of these bring to mind Milton's 'Paradise Lost'. The novel shows evidence of Mary Shelley's interest in scientific ideas of the time, a time when the conversation of intelligent, well-educated people often turned to recent scientific developments. Alison Hines 4L 1 ...read more.