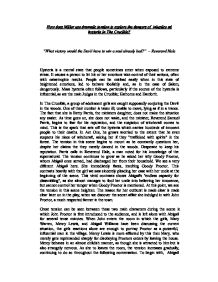 How does Miller use dramatic tension to explore the dangers of injustice ad hysteria in The Crucible? "What victory would the Devil have to win a soul already bad?" - Reverend Hale Hysteria is a mental state that people sometimes enter when exposed to extreme stress. It causes a person to let his or her emotions take control of their actions, often with catastrophic results. People can be mislead easily when in this state of heightened emotions, led to behave foolishly and, as in the case of Salem, dangerously. Mass hysteria often follows, particularly if the source of the hysteria is influential, as are the main Judges in the Crucible; Hathorne and Danforth. In The Crucible, a group of adolescent girls are caught supposedly conjuring the Devil in the woods. One of their number is taken ill, unable to move, lying as if in a trance. The fact that she is Betty Parris, the ministers daughter, does not make the situation any easier. As time goes on, she does not wake, and the minister, Reverend Samuel Parris, begins to fear for his reputation, and the suspicion of witchcraft comes to mind. This is the spark that sets off the hysteria which carries hundreds of innocent people to their deaths. In Act One, he grows worried to the extent that he even suspects his niece of witchcraft, asking her if they "trafficked with spirits" in the forest. ...read more.

As the psalm is being sung, Betty suddenly sits up and "whines loudly". As this is going on, Parris and the two Putnam's rush in. The Putnam's are a selfish, unpleasant pair who have known hard times, having lost all but one child. This has caused them to become exceptionally superstitious as they regard the death's of their seven daughters as something supernatural. Because of this the Putnam's are almost hoping to find traces of witchcraft in Betty's ailment, as they believe that this will lead them to find out the supposedly supernatural cause of their daughters deaths. Later in this scene, we see a great rise in the tension once again as Reverend Hale questions Abigail and Parris's slave Tituba regarding what went on in the woods. As Tituba enters the room Abigail points to her, screaming, "She made me do it, she made Betty do it!. This immediate reaction to Tituba's entrance shows Abigail's panic at being bombarded by accusations of witchcraft. These are the first signs of hysteria within the play. As Abigail shrieks her accusations on Tituba to shift the blame from herself and Betty, we see the tension in the scene rise rapidly. Hale's attention immediately switches to Tituba, who immediately protests against the accusation, although she does not deny that she "has knowledge of conjuring". ...read more.

As John's anger grows, he accuses her of never trusting him. In turn she accuses him of being dishonest with her. The tension in the scene is at a climax and they are arguing heatedly when Mary Warren enters, having just returned from the court in Salem. Proctor immediately grabs her and reprimands her for leaving wothout permission, and they do not continue their argument. In this scene we can clearly see the damage that Proctors affair has done to the relationship between him and Elizabeth. She has lost all trust in him, becoming suspicious at the slightest thing. In turn, he is not honest with her, hiding the fact that he and Abigail were alone together in order to avoid her suspicion. John does try to make up for his past sins, but cannot control his temper after she does not react to any of his affectionate gestures. This shows that she has not forgiven him for the afair. either. Throughout all the key scenes mentioned, dramatic tension can be felt between characters, particularly at moments of hysteria, such as Betty's awakening, and arguments, such as the one between John and Elizabeth. As characters get carried away with the tide of events, they do not realise the injustice and danger thier actions cause, such as when Parris threqatens Tituba. Hysteria leads to Abiagil, Tituba and Betty comdemning many respectable people to their deaths for crimes that they did not commit. Their actions resulted in a blemish that may never be wiped from man's history. ...read more.