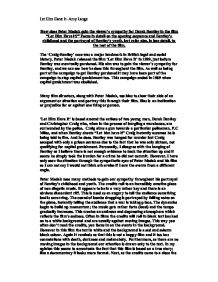 How does Peter Medak gain the viewer(TM)s sympathy for Derek Bentley in the film Let Him Have it? Focus in detail on the opening sequence and Bentley(TM)s childhood and the portrayal of Bentley(TM)s you

How does Peter Medak gain the viewer's sympathy for Derek Bentley in the film "Let Him Have it?" Focus in detail on the opening sequence and Bentley's childhood and the portrayal of Bentley's youth, but refer also, in less detail, to the rest of the film. The 'Craig-Bentley' case was a major landmark in British legal and social history. Peter Medak released the film 'Let Him Have It' in 1999, just before Bentley was eventually pardoned. His aim was to gain the viewer's sympathy for Bentley, and we can see how he does this throughout the film. As well as being part of the campaign to get Bentley pardoned it may have been part of the campaign to stop capital punishment too. This campaign ended in 1969 when capital punishment was abolished. Many film directors, along with Peter Medak, use bias to show their side of an argument or situation and portray this through their film. Bias is an inclination or prejudice for or against one thing or person. 'Let Him Have It' is based around the actions of two young men, Derek Bentley and Christopher Craig who, when in the process of burgling a warehouse, are surrounded by the police. Craig aims a gun towards a particular policeman, P.C Miles, and when Bentley shouts "Let him have it" Craig instantly assumes he is being told to fire. And he does. Bentley was hanged for murder but Craig escaped with only a prison sentence due to the fact that he was only sixteen, not qualifying for capital punishment. ...read more.

The music continues and there are silhouettes and shadows moving rapidly, linking with the sombre bass note of the music. We are introduced to Bentley through an establishing shot of him urinating against a tree. However, Bentley is shown in the moonlight rather than the darkness which makes the audience sympathise with him because it seems to take him out of the darkness and wrong doing. Bentley shouts "Get Off!" to the boys as they shine a torch on him which makes us sympathise with Bentley because we see he gets used a bit like a toy; he is played with and often gets mocked. It also shows that he is maybe quite insecure. When the boys enter the shed there is much diagetic sound as pots and tins clatter and smash. The lighting is still dark and there is moonlight entering through the windows. The fact that Bentley's face is often shown in the light is repeated throughout the film and I, along with others, feel that this is used to reflect his innocence. In addition to this we see that whilst the boys vandalise the shed Bentley does not seem to join in until he is shown something by another boy. This shows how he is influenced easily and encourages us to sympathise with him. He seems to have quite a blank expression on his face throughout the scene, reminding the audience that he is quite "simple". ...read more.

By the looks on their faces we can see that they are pleading for Bentley's pardon. It then shows an extreme close up of Bentley's face, focussing on his eyes that are shaking and the sweat that is on his face. When the jury are firing questions at him it is similar to when he was buried under the rubble; he appears very "spaced out" and can hardly answer their questions. His voice becomes very monosyllabic. All the way through this scene it is made very obvious that the court is doing all they can to get Bentley hanged even though many of them are doubting what is being said. By the time we reach the execution scene we are already feeling so sympathetic towards Bentley that Peter Medak's task is complete. Our sympathy for Bentley is absolute. The sombre music continues and we still see that Bentley does not have much idea about what he is about to be put through. To conclude, I think that Peter Medak is very successful at gaining our sympathy for Bentley in this film. However, I think that this is enabled by the fact that we have not been enabled to view the 'whole' story from every perspective. Some people, such as P.C Miles' family, would probably voice very different sympathies. The undeniable success of the film lies in its message that capital punishment is a dangerous tool which should be stopped. We have simply seen how an innocent person can fall victim to the verdict of a few unknown people in a court room. Let Him Have It- Amy Lange ...read more.