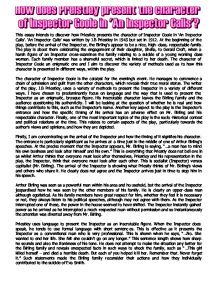 How does Preistley present the character of Inspector Goole in 'An Inspector Calls'?

This essay intends to discover how Priestley presents the character of Inspector Goole in 'An Inspector Calls'. 'An Inspector Calls' was written by J.B Priestley in 1945 but set in 1912. At the beginning of the play, before the arrival of the Inspector, the Birling's appear to be a nice, high-class, respectable family. The play is about them celebrating the engagement of their daughter, Sheila, to Gerald Croft, when a harsh figure of an Inspector cross-examines the family relating to a suicide of a young working class woman. Each family member has a shameful secret, which is linked to her death. The character of Inspector Goole an enigmatic one and I aim to discover the variety of methods used as to how this character is presented in different ways, within the play. The character of Inspector Goole is the catalyst for the evening's event. He manages to commence a chain of admission and guilt from the other characters, which reveals their true moral status. The writer of the play, J.B Priestley, uses a variety of methods to present the Inspector in a variety of different ways. I have chosen to predominantly focus on language and the way that is used to present the Inspector as an enigmatic, brusque figure. His inscrutable character leaves the Birling family and the audience questioning his authenticity. I will be looking at the question of whether he is real and how things contribute to this, such as the Inspector's name. Another key aspect to the play is the Inspector's entrance and how the specific timing of his arrival has an adverse effect on Mr. Birling and his respectable character. Finally, one of the most important topics of the play is the socio-historical context and political relations at the time. This relates to certain aspects of the play, particularly towards the author's views and opinions, and how they are depicted. Firstly, I am concentrating on the arrival of the Inspector and how the timing of it signifies his character. ...read more.

As the Titanic had represented the prime of industry and mechanism, the sinking of it signified of what was to come in the future. Mr. Birling appeared to have great faith and confidence in the Titanic to be unsinkable and Priestley shows just how wrong he was, and how his opinions and views are the ones that he shares. Also, the importance of the mentioning of the Titanic is also linked to the year in which it happened - 1912, which in pre-world war Britain held different experiences for different classes. 1912 was a time of security and prosperity. However this was only the situation for those who were the aristocracy and business people - those who were wealthy. Those of the lower classes were treated the oppositely. They were badly paid, deprived and unprotected by the state. One of the most important reasons that the play was set in 1912 was that it was pre-world war Britain. Therefore the troubles that Eva Smith faces were more believable than they would have been if he had set it later on. This is because later on after World War One began, times for the lower classes were very hard, much harder than pre-war Britain. When J.B Priestley wrote the play in the winter of 1945, the world has just experienced another World War. Unlike the First World War (1914-1918), where the Working Classes were sent to the Front Line to fight, and most likely die, while the Upper Classes stayed back in safety, planning where to send the armies next, the Second World War (1939 - 1945) was much different. People were not given ranks because of their positions in society, but because of their knowledge and skill. For the first time, possibly ever, the classes had to work together so they could survive. There was no room for their class system in wartime Britain. ...read more.

He strips them all of their names, their frivolities and arrogant attitudes until they are nothing but guilt-ridden, remorseful and ashamed. Being the driving force of the play, the Inspector gradually and systematically unravels the truth whilst constantly reinforcing the Birling's responsibility for the death of the young woman. Priestley's socialist values are easy to depict through the character of Inspector Goole as he frequently emphasises the importance of unity between the social classes. Personally, I think it is obvious that the Inspector didn't turn up that evening to find out the truth about each character's involvement with Eva Smith / Daisy Renton, but to make them realise how their complacent perspectives, pompous attitudes and foolish actions can cause the most drastic consequences. In conclusion, I have discovered that J.B. Priestley uses a variety of different ways to present the character of Inspector Goole in a range of diverse ways. In my opinion, the main techniques that he uses are language and the question of the authenticity of the Inspector. These things manage to present the Inspector as a powerful, enigmatic, brusque figure who may have introduced himself as a police Inspector but is truthfully a moral Inspector, wanting to determine the truth behind the death of Eva Smith. He is presented in these particular ways by his use of short sentences, which make him come across as slightly abrupt and often rude. On the other hand, he is unreadable and this is shown by the question of his name and how he appears to be able to foretell the future. These make him appear as a mysterious figure and that even at the end of the play, the audience is not informed of the truth behind his entrance. The background to the play shows that the Inspector was a firm socialist who enjoyed bringing out the consciences of the characters then leaving them wondering how he had actually done it. ...read more.