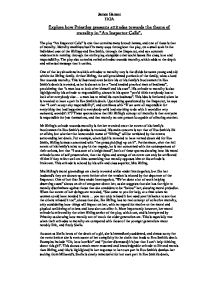 How does Priestley present attitudes to the theme of morality in &quot;An Inspector Calls&quot;?

Explore how Priestley presents attitudes towards the theme of morality in "An Inspector Calls". The play "An Inspector Calls" is one that contains many broad themes, and one of these is that of morality. Morality manifests itself in many ways throughout the play, on a small scale in the individual case of the Birlings and Eva Smith, through the Inspector, and as a constant undercurrent running through the entire play, alongside other social issues like class, love and responsibility. The play also contains varied attitudes towards morality, which adds to the depth and universal message that it carries. One of the key situations in which attitudes to morality vary is the divide between young and old within the Birling family. Arthur Birling, the self-proclaimed patriarch of the family, takes a hard line towards morality. This is illustrated even before his or his family's involvement in Eva Smith's death is revealed, as he is shown to be a "hard headed practical man of business", proclaiming that "a man has to look after himself and his own". His attitude to morality is also highlighted by his attitude to responsibility, shown in his quote "you'd think everybody has to look after everybody else... ...read more.

Now you've stopped". This shows that Sheila can see past basic fact, and knows that morally, whatever the final consequence of any poor conduct, the conduct has still been poor and therefore cannot be condoned. This is again an example of the divide between youth and age, with Birling and his wife feeling that "this (the fact that the Inspector was a fake) makes all the difference", highlighting the moral naivety of the Birling seniors, and thereby emphasising the moral strengths of the younger. The other main example of Sheila's moral perception is that of truth and honesty, particularly in the dialogue preceding Mrs Birling's interrogation. She often interjects early on, seemingly unnecessarily, for example "no mother, please!" and "I feel you're beginning all wrong". However, she explains her stance further on in the scene, with "You mustn't try to build up a wall between us and that girl...the Inspector will just break it down". The Inspector then confirms Sheila's fears- "She's right". This perception of truth and honesty contrasts not only the moral empathy of the young with the more apathetic feelings of the older, but also their knowledge and perception of the world around them- another example being Birlings speeches of "There's no chance of war" and suchlike, which shows how out of touch he is. ...read more.

The Inspector's views on morality are furthered and deepened in the final acts of the play- in one very small section of his final speeches. He first recounts the chain of events theory that is running throughout the play, showing that moral actions and consequences can be linked- in total contrast with the denial of the senior Birlings. He states "The girl killed herself, and died a horrible death. But each of you helped to kill her". He then moves on to each character in turn and morally questions them, as he did in his investigation. He shows that despite events being similar, the extent of their morality, for better or for worse, can vary immensely. An example is that of Eric and Gerald, as previously mentioned, and also that of Birling and Sheila. He says to Birling, "You started it... you made her pay a heavy price for that. And now she'll make you pay a heavier price still", but to Sheila, simply "you helped". As with Eric and Gerald, these are two extremely similar events, but morally the Inspector sharply distinguishes them. His highlighting of how Eva Smith will now make Birling "pay" also shows the extent of his attitude to morality- it will remain long after the actions and consequences have passed. This is furthered by "I don't think any of you will forget". ...read more.