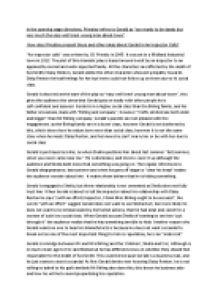 How does Priestly present Gerald in &quot;An Inspector Calls&quot;?

﻿In the opening stage directions, Priestley refers to Gerald as ?too manly to be dandy but very much the easy well bred- young man-about-town? How does Priestley present these and other ideas about Gerald in An Inspector Calls? ?An inspector calls? was written by J.B. Priestly in 1945. It was set in a Midland Industrial town in 1912. The plot of this dramatic play is based around a visit by an inspector to an apparently normal and well-respected family. All the characters are affected by the death of Eva Smith/ Daisy Renton, Gerald unlike the other characters showed sympathy towards Daisy Renton he had feelings for her but knew could not follow up on them due to hi social class. Gerald is descried at the start of the play as ?easy well bred- young man-about-town?, this gives the audience the sense that Gerald gets on easily with other people he is self-confident and assured. ...read more.

The regular references to Gerald disappearance, last summer and when he goes off stage to ?clear his head? makes the audience wonder about him. It makes them believe that he is hiding something. Gerald is engaged to Shelia, but there relationship is not cemented as Shelia does not fully trust him. When Gerald is about to tell the inspector about his relationship with Daisy Renton he says ?(with an effort) Inspector, I think Miss Birling ought to be excused?, the words ?with an effort? suggest Gerald does not want to see Shelia hurt, but more likely he does not want to be embarrassed by his foolish actions, that he had slept and cared for a women of such low social class. When Gerald accuses Shelia of wanting to see him ?put through it? the audience realise that he has something terrible to hide. ...read more.

When Gerald goes off set the audience get suspicious to what he is getting up to, when he comes back he comes with news that the Inspector is not real, ?that man was not a police officer? Gerald wants to protect himself rather than changing for the good. Gerald learns nothing throughout the play, only to be truthful to Shelia, we know that he has learnt nothing as he says when he finds that there is no girl in the hospital ?that makes all the difference? he does not care in the slightest about of all the acts the family and himself have committed, he is just revealed that there cannot be a scandal and that his reputation is still clean. In conclusion Gerald is presented as a selfish and self-centred man that only cares about business. He is more suited in the generation of Mr/ Mrs Birling as he believes that as they feel no responsibility for the actions that they have committed. ...read more.