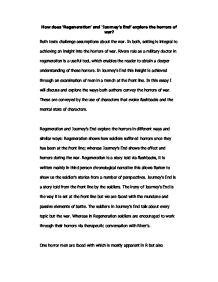 How does 'Regeneration' and 'Journey's End' explore the horrors of war?

How does 'Regeneration' and 'Journey's End' explore the horrors of war? Both texts challenge assumptions about the war. In both, setting is integral to achieving an insight into the horrors of war. Rivers role as a military doctor in regeneration is a useful tool, which enables the reader to obtain a deeper understanding of these horrors. In Journey's End this insight is achieved through an examination of men in a trench at the front line. In this essay I will discuss and explore the ways both authors convey the horrors of war. These are conveyed by the use of characters that evoke flashbacks and the mental state of characters. Regeneration and Journey's End explore the horrors in different ways and similar ways: Regeneration shows how soldiers suffered horrors once they has been at the front line; whereas Journey's End shows the effect and horrors during the war. Regeneration is a story told via flashbacks, it is written mainly in third person chronological narrative this allows Barker to show us the soldier's stories from a number of perspectives. ...read more.

people who really experienced the horrors: for example: Prior: "Like somebody selecting a particularly choice morsel from a plate...His fingers touched the smooth surface and slid before they managed to get hold" Barker uses a sensory description to convey to the audience how horrific Prior's experience was because the reader will be able to relate easily to sensory description. Sheriff makes horror horrific by lulling his audience into a false sense of security and by feeding the audience with images of home so we think of the soldiers as brothers, fathers and sons rather then a military figure: "Quote about Trotters garden." Then Sheriff strikes the audience down by bringing them back to a harsh reality with Osbourne's death, but Stanhope is forced to repress his emotions about Osbourne's death: " And yet you can sit there and drink champagne and smoke cigars" "...To forget, you little fool-to forget." The drinking and smoking of cigars suggests celebration and this is how Stanhope is repressed by being forced to celebrate and not to dwell on his emotions. ...read more.

Barker uses Burns as her implicit device: "Quote about burns vomiting in the canteen" Burns is a non-fictional character who Barker uses to embodies the horrors of war via his lack of consumption: "Quote about him slowly dying" Whereas in Journey's Ed there's Stanhope's excessive consumption on alcohol and cigarettes: " Earwig in whiskey quote" This is a metaphor for Stanhope and how when he is under the influence of alcohol he is able to function as an Officer but not as a human being. Relationships also play a part in R and JE. In JE Osborne and Stanhope have a paternal type of relationship and this could be seen to be parallel in R by Sassoon and River's: "Quote about O and S" "Quote about R and S" Many parallels can be drawn from both relationships. Both Sassoon and Osborne have a 'flawed hero' aspect to them. An example of Osborne acting as a parental figure to Stanhope: "Kiss me Uncle! "Kiss you be blowed, you go to sleep." This quotation uses a humorous tone to show the parental role that Osborne plays to Stanhope. ...read more.