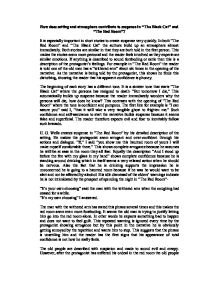 How does setting and atmosphere contribute to suspense in &quot;The Black Cat&quot; and &quot;The Red Room&quot;? It is especially important in short stories to create suspense very quickly. In

How does setting and atmosphere contribute to suspense in "The Black Cat" and "The Red Room"? It is especially important in short stories to create suspense very quickly. In both "The Red Room" and "The Black Cat" the authors build up an atmosphere almost immediately. Both stories are similar in that they are both told in the first person. This makes the stories seem more personal and the reader feels involved as they experience similar emotions. If anything is described to sound foreboding or eerie then this is a description of the protagonist's feelings. For example in "The Red Room" the reader is told one of the old men has a "withered arm" about six times in the opening of the narrative. As the narrative is being told by the protagonist, this shows he finds this disturbing, showing the reader that his apparent confidence is phoney. The beginning of each story has a different tone. It is a sinister tone that starts "The Black Cat" where the persona has resigned to death- "But tomorrow I die," This automatically builds up suspense because the reader immediately wonders why the persona will die, how does he know? This contrasts with the opening of "The Red Room" where the tone is confident and pompous. ...read more.

However, the protagonist describes the old man talking to him at the end "no longer as one who greets an intruder, but as one who grieves for a broken friend." This obvious human quality is a complete contrast to the beginning. After his suffering he is no longer scared but glad to be in company because wants to feel safe. Therefore the negative remarks about the old people are replaced by the positive. Edgar Allen Poe uses the psychological complexity of the protagonist to create tension and entice the reader to read on in "The Black Cat". The narrative explores the evils of alcohol and the speed at which humans can be infected; in fact Poe calls it a "disease". Poe speaks from personal experience about the evils of alcohol. Another theme is perverseness and its place as one of the evils in human nature. Poe makes the reader feel shame for the terrible flaws of humanity. As the narrative is written in the first person it seems to take the form of a confession. The protagonist begins writing as if it is to someone because he says "I neither expect nor solicit belief". He is implying that he does not care if the reader believes he needs to clear his conscience. ...read more.

This simple language at key points means the action is not obscured by complex vocabulary. However, when the emotions felt are more important than the action, the language is more complex to encourage the reader to empathise with the protagonist. Both short stories are successful in that they effectively create suspense and engage the reader. "The Black Cat" can be interpreted on many levels. It can be read as a story about an unlucky sequence of events but it is also contains superstition, perverseness and the evils of alcohol. Poe creates a very complex character which fascinates the reader. He discusses a variety of philosophical and sociological issues. The suspense comes from the dilemma of the character but there is also shame because Poe suggests his actions are something all humans are capable of doing. "The Red Room" on the other hand is a frightening but nonetheless enjoyable read because of the detailed description of the setting. The description of the protagonist when in the red room is well written and the reader feels his fear. Suspense is created from his earlier over confidence and we wait for something bad to happen. I prefer "The Black Cat" because the description is so thorough; the story is dramatic and demonstrates a complex range of emotions. Matthew Barden ...read more.