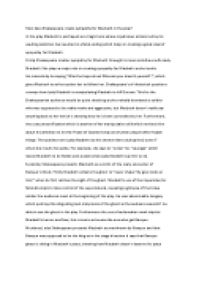 How does Shakespeare create sympathy for Macbeth in the play?

Transfer-Encoding: chunked ﻿How does Shakespeare create sympathy for Macbeth in the play? In the play Macbeth is portrayed as a tragic hero whose injudicious actions led by his vaulting ambition has resulted in a fatal ending which helps in creating a great deal of sympathy for Macbeth. Firstly Shakespeare creates sympathy for Macbeth through his more ambitious wife Lady Macbeth. She plays a major role in creating sympathy for Macbeth as she insults his masculinity be saying ?Was the hope drunk Wherein you dress'd yourself ??,which gives Macbeth no other option but to follow her. Shakespeare's of rhetorical questions conveys how Lady Macbeth is manipulating Macbeth to kill Duncan. This for the Shakespearian audience would be quite shocking as she verbally bombards a soldier who was supposed to be really manly and aggressive, but Macbeth doesn?t really say anything back to her which is showing how he is been controlled by her. ...read more.

He uses abominable imagery which portrays the disgusting and scary looks of the ghost as the audience wouldn?t be able to see the ghost in the play. Furthermore the use of exclamation mark depicts Macbeth's horror and fear, this is ironic as he was the one who got Banquo Murdered, also Shakespeare presents Macbeth as overthrown by Banquo and that Banquo was supposed to be the king as in the stage direction it says that Banquo ghost is sitting in Macbeth's place ,showing how Macbeth doesn?t deserve his place making him an outcast rather than a powerful king. Furthermore, Shakespeare portrays how Macbeth is an ordinary man who is desperate for more normal life. Macbeth mentions how he wants ?love, obedience, troops of friends? which lacks in his life. ...read more.

Shakespeare gives Macbeth a title ?noble Macbeth? which not every soldier or king would often get he and he receives this by the king himself. He goes against the divine rights of a king which states how a king is equal to god but Macbeth goes against this with the help of his wife Lady Macbeth even though his conscience reminding him that he was overstepping the mark. Shakespeare?s use of diabolical imagery is taking the reference of how devil who was initially a really good angel but because of his pride and going against god he was forcefully sent to hell, likewise Macbeth's was initially a really good person but because of bad influence he is turned into the person he is. ...read more.