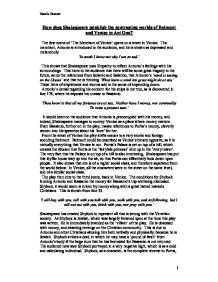 How does Shakespeare establish the contrasting worlds of Belmont and Venice in Act One?

How does Shakespeare establish the contrasting worlds of Belmont and Venice in Act One? The first scene of 'The Merchant of Venice' opens on a street in Venice. The merchant, Antonio is introduced to the audience, and he is shown as depressed and melancholy. 'In sooth I know not why I am so sad.' This shows that Shakespeare uses Empathy to reflect Antonio's feelings with his surroundings. This hints to the audience that there will be some great tragedy in the future, as do the references from Solanio and Salarino, that Antonio's 'mind is tossing on the Ocean' and that he is thinking 'What harm a wind too great might do at sea.' ...read more.

Portia's Palace is set on top of a hill, which creates the illusion that Portia is the 'fairytale princess' shut up in the 'ivory tower'. The very fact that the Palace is on top of a hill is also interesting. Shakespeare has put this idyllic house way up into the air, so that Portia can effectively look down upon people. It also shows that she is of a higher social class, and therefore separated from the world below. In Venice, all the characters were in the street on the same level, and of a similar social class. The play then cuts to the third scene, back in Venice. ...read more.

Shylock strikes a deal, in which he may have a 'pound of flesh' from Antonio's body if the large sum that he has borrowed for Bassanio is not returned. The audience now sees Shylock portrayed in a very negative light, which is as a cold and calculating individual. Shylock, as a character, is the complete reverse to Portia, she seems to be bored and slightly frustrated in her Palace, but is basically good, and indeed, later in the play she saves Antonio's life with her quick wit and intelligence. In conclusion Shakespeare's uses of concepts, such as binary opposition and empathy all contribute to the almost parallel worlds of Belmont and Venice. He either gives his characters a sense of righteousness or immorality, as is shown in the basic nature of Portia and Shylock. Word Count: 672 Natalie Burnett 1 ...read more.