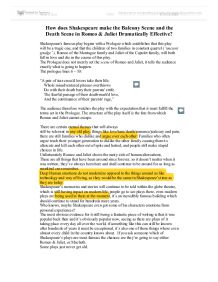 How does Shakespeare make the Balcony Scene and the Death Scene in Romeo &amp; Juliet Dramatically Effective?

How does Shakespeare make the Balcony Scene and the Death Scene in Romeo & Juliet Dramatically Effective? Shakespeare's famous play begins with a Prologue which establishes that this play will be a tragic one, and that the children of two families in constant quarrel ("ancient grudge"), Romeo of the Montague family and Juliet of the Capulet family, will both fall in love and die in the course of this play. The Prologue does not merely set the scene of Romeo and Juliet, it tells the audience exactly what is going to happen. The prologue lines 6 - 10: "A pair of star-cross'd lovers take their life; Whole misadventured piteous overthrows Do with their death bury their parents' strife. The fearful passage of their death-mark'd love, And the continuance of their parents' rage," The audience therefore watches the play with the expectation that it must fulfill the terms set in the Prologue. The structure of the play itself is the fate from which Romeo and Juliet cannot escape. There are certain eternal themes that will always still be relevant in any old play, things like love/hate/death/romance/jealousy and pain, there are still families who dislike and argue over each other. Families who often argue teach their younger generation to dislike the other family causing them to altercate and kill each other out of spite and hatred, and people still make stupid choices in life. ...read more.

Shakespeare makes Romeo a very believable adolescent character, which adds to the drama and tenstion because of how realistic it sounds, as most elder generations believe that kids claim to fall in love with people when really they just think they do because all the emotions are new to them, and they assume it's love. This is just after the party when Romeo and Juliet first meet, there was an immediate reaction and now he's run off to find her. "But soft! What light through yonder window breaks. It is the East and Juliet is the Sun." - This is a very strong reference to how Romeo see's Juliet at that moment, how she is the sun and he gazes apon her, examining how beautiful she is, he feels as though she is the saviour of his life, she will make everything well for him, and now he must get her, by trying to be the perfect lover. "Arise, fair sun, and kill the envious moon Who is already sick and pale with grief" Another quote of how she will get rid of the "envious moon", which i think is a reference to how Juliet will remove all the bad thoughts from his head and all the evil from his life. Shakespeare portraits a very romantic scene here, using natural imagery, with Juliet in the moonlight, with Romeo talking about her sunlit poseur and her eyes. ...read more.

What there is to consider, is Shakespeare celebrating the wonders and feelings of young love? Or is he warning us about unseen consequences, like that they'll be together for a while and everything will be amazing, but there's always a catch that comes with something good, as what they have Is a 'forbidden love', and it's just not meant to be. Shakespeare is giving us both answers by telling us that there is no answer, it's love and it's immensely difficult to control. Romeo's language is much more violent and outgoing in this scene. "Joint by Joint" He attempts to tell Paris to leave as a warning, but when he doesn't listen Romeo is left with no choice other than to kill him. Vocabulary imagery is also used again too. "The womb of death." Romeo immediately realizes that Paris is equally caught up in this web of hate. When he arrives at the place of Juliet's body, he says that "Even in death Juliet's body lights up the room." which directly links to Juliet being the sun on the Balcony Scene at the start. There is irony in the scene too when Romeo says that she looks so alive when she's dead, when really, she isn't dead at all, her plan has just not worked out the way she planned. The image of a pilot that has come to the very end of his journey comes to mind. ?? ?? ?? ?? Stan Allen 10M ENGLISH ...read more.

This essay has some perceptive and sensitive analysis and shows a good understanding of the play. It also shows in places sophisticated language analysis.
However the whole essay should be more focused on the question and use topic sentences at the start of each paragraph to inform the reader what the paragraph is going to be about and to refer to the essay question.
Knowledge of social and historical context is sound but there needs to be more exploration of the death scene - it ends very abruptly with a very unsatisfactory exploration of the final scene and the ultimate line is confusing and unexplained.
But important to exemplify how each part of the question needs equal weighting and a conclusion is