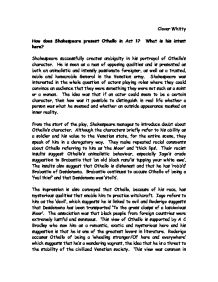 How does Shakespeare present Othello in Act 1? What is his intent here?

Clover Whitty How does Shakespeare present Othello in Act 1? What is his intent here? Shakespeare successfully creates ambiguity in his portrayal of Othello's character. He is seen as a man of opposing qualities and is presented as both an animalistic and intensly passionate foreigner, as well as a trusted, noble and honourable General in the Venetian army. Shakespeare was interested in the whole question of actors playing roles where they could convince an audience that they were something they were not such as a saint or a woman. The idea was that if an actor could seem to be a certain character, then how was it possible to distinguish in real life whether a person was what he seemed and whether an outside appearance masked an inner reality. From the start of the play, Shakespeare manages to introduce doubt about Othello's character. Although the characters briefly refer to his ability as a soldier and his value to the Venetian state, for the entire scene, they speak of him in a derogatory way. They make repeated racial comments about Othello referring to him as 'the Moor' and 'thick lips'. ...read more.

The unfavourable views of the three hostile characters, support the view of Othello as being a menacing heathen and leave the audience intrigued at the end of Act 1, scene 1. Othello's appearance in Act 1, scene 2, instantly challenges any pre-conceived ideas that the audience may have of his character as his opening remarks are conciliatory. Othello is keen to defend his good reputation and speaks proudly of his value to the Venetian state. 'My services which I have done the signiory/Shall out tongue his complaints'. He is also keen to stress his birthright as he justifies his decision to marry Desdemona, 'I fetch my life and being/From men of Royal seige'. However, Othello doesn't appear as the same pompous and boastful general described in Act 1 scene 1, 'loving his own pride and purposes', instead he is portrayed as authoritative and self controlled. His behaviour completely contrasts to Brabantio's emotional outbursts and abusive insults and Iago's vulgar accusations in Act 1 scene 1. Othello shows himself to be honourable in his willingness to answer Brabantio's charge of any wrong doing in his marriage to Desdemona. ...read more.

Although Othello claims to be 'rude' in his speech and intends to deliver a 'round unvarnished tale', the speeches that he makes to the senate in Act 1 scene 3 show his eloquence. His authority is illustrated as he shows himself to be a powerful public speaker through his use of hyperbole and rhetoric. He uses sensuous imagery and metaphor to enchant his listeners 'Of my whole course of love:what drugs, what charms, what conjuration and what mighty magic', which results in even the Duke approving of Othello's story of Desdemona's love for him, 'I think this tale would win my daughter too'. Through his contradictory portrayal of Othello in Act 1, it seems that Shakespeare intended the audience to be open minded and unprejudiced. He wanted to deliver the message that pre conceived beliefs are not always correct and appearance and reality can be completely opposed He wanted to represent that skin colour and religious beliefs do not always mean that a person is good or bad and so by making Othello a black hero, an experienced and accomplished warrior, physically attractive to women, imaginative and a powerful public speaker, Shakespeare opposes cultural misconceptions and reverses the racial prejudice of his time that evil is indicated by skin colour. ...read more.