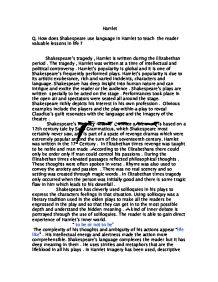 How does Shakespeare use language in Hamlet to teach the reader valuable lessons in life ?

Hamlet Q. How does Shakespeare use language in Hamlet to teach the reader valuable lessons in life ? Shakespeare's tragedy , Hamlet is written during the Elizabethan period . The tragedy , Hamlet was written at a time of intellectual and political controversy . Hamlet's popularity is global and it is one of Shakespeare's frequently performed plays. Hamlet's popularity is due to its artistic exuberance, rich and varied incidents, characters and language. Shakespeare has deep insight into human nature and can intrigue and excite the reader or the audience . Shakespeare's plays are written specially to be acted on the stage . Performances took place in the open air and spectators were seated all around the stage. Shakespeare richly depicts his interest in his own profession . Obvious examples include the players and the play-within-a-play to reveal Claudius's guilt resonates with the language and the imagery of the theatre . Shakespeare's Tragedy - Hamlet, Prince of Denmark is based on a 12th century tale by Saxo Grammaticus, which Shakespeare most certainly never saw, and is part of a spate of revenge dramas which were extremely popular around the turn of the seventeenth century. Hamlet was written in the 17th Century . In Elizabethan times revenge was taught to be noble and man made . According to the Elizabethans there could only be order only if man could control his passions . During the Elizabethan times elevated passages reflected philosophical thoughts . These thoughts were often spoken in verse . Rhyme was also used to convey the anxiety and passion . There was no real scenery and so setting was created through magic words . In Elizabethan times tragedy only occurred when the person was initially good and there is some tragic flaw in him which leads to his downfall . Shakespeare has cleverly used soliloquies in his plays to express the characters feelings in that situation. ...read more.

These instructions resembles of a typical father who advices his son when he goes out for future studies . The first thing Polonius tells him "The wind sits in the shoulder of your sail" . Shakespeare uses stunning language techniques when he portrays some very valuable lessons which could be applied in our lives. He makes use of Personification here . Polonius tries to tell Leartes that nature is favoring him that he should go out of the country to study . Shakespeare gives the wind the quality to "sit" . "look thou character. Give thy thoughts no tongue". This line emphasizes that a person should think before he / she speak because if you don't think the other person might have a wrong impression about you . This is a lesson for the reader that he should think before he speaks . "Be thou familiar , but by no means vulgar. Those friends thou hast and their adoption to them Grapple them unto thy soul with hoops of steel" Harsh words have been used by Shakespeare "vulgar". Shakespeare has used harsh words so that the reader learns that a person should not be rude in friendship and you should not offend your friends as they are an integral part of your life . This line conveys the message that we should be pleasant in our friendship when dealing with others and that we should not become cheap with the common people . The 2nd sentence teaches the reader that we should not be overfriendly with someone as there could be disagreements between friends . " But do not dull thy palm with entertainment" . Negative words like "dull" have been used to emphasize on the point that your friendship should not be meaningless . We should also be very selective while choosing our friends. We should not be with bad company but with true friends who will help us out . ...read more.

If we are not able to repay back a loan then we will be in hot water and the same if we don't receive the money . This is again one of the most valuable lessons of life that we should not lend nor borrow and we should work hard and earn our money by ourselves and not depend on any one for money. In my conclusion I would like to say that this play is incredible and it teaches the reader various lessons of life that can be applied in our daily lives . One lesson we learn is that we should always respect our parents and elders . This is our primary duty of all children but obeying the parents now days has become impossible. The next is that we should have a true friend which will help us out and there should be equal right to speak between the friends . Now days people don't value friendship and take advantage of another person. We should also learn that we should not procrastinate as we can boost our will power. There was a tragic flaw in Hamlet's character as he delayed his work . Shakespeare has used a lot of comparisons , imagery and similes in the play . " violet in the youth of primy nature" - imagery . "You speak like a green girl - simile . " heart with strings of steel"- comparison . Shakespeare's genius and mastery of language has helped the reader to appreciate the intensity of Hamlet's turmoil and his trauma. Shakespeare's heroes have preoccupation with them and are introspective in nature . The tragic heroes are haunted by their conscience seeking their true selves . Shakespeare has the ability to capture the outburst of emotions very effectively through his choice of words. In my opinion Shakespeare is terrific when it comes to play with the reader's psychology. From this play the author's creative genius shines out, demonstrates his knowledge of human spirit , is mastery of plot, and the unbelievable wealth of his language .. ...... Done by Amit Mukhi ...read more.