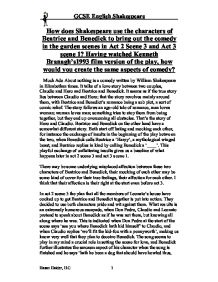 How does Shakespeare use the characters of Beatrice and Benedick to bring out the comedy in the garden scenes in Act 2 Scene 3 and Act 3 scene 1?

How does Shakespeare use the characters of Beatrice and Benedick to bring out the comedy in the garden scenes in Act 2 Scene 3 and Act 3 scene 1? Having watched Kenneth Branagh's1993 film version of the play, how would you create the same aspects of comedy? Much Ado About nothing is a comedy written by William Shakespeare in Elizabethan times. It talks of a love story between two couples, Claudio and Hero and Beatrice and Benedick. It seems as if the true story lies between Claudio and Hero; that the story revolves mainly around them, with Beatrice and Benedict's romance being a sub plot, a sort of comic relief. The story follows an age-old tale of romance, man loves woman; woman loves man; something tries to stop them from being together, but they end up overcoming all obstacles. That's the story of Hero and Claudio. Beatrice and Benedick on the other hand have a somewhat different story. Both start off hating and mocking each other, for instance the exchange of insults in the beginning of the play between the two, when Benedick calls Beatrice a 'Harpy', a mythological winged beast, and Beatrice replies in kind by calling Benedick a '____'. This playful exchange of unflattering insults gives us a baseline of what happens later in act 2 scene 3 and act 3 scene 1. ...read more.

Many things that are said in this scene seem to be over the top, like when Claudio emphasises, 'she will die' if she does not get Benedick, it seems to be a part in the play which would best be played with Claudio shouting these lines. Claudio seems to really enjoy the acting profession, and might think too highly of himself as an actor, as he also seems to over exaggerate the lines when he says that Beatrice 'beats her heart', 'tears her hair' and so forth as well as the over emphasis of 'she will die in later lines. This picture is given to me mainly from the movie, and it is actually quite funny the way Claudio acts so melodramatic. I would have him play in almost exactly the same way all of his lines. Naturally I would want any actor playing the part of Claudio in this scene to be hysterically melodramatic, I would want him to shout out his lines at the top of his voice, deliberately use giant hand motions, exaggerate almost every aspect of his character to play these lines in this scene. Leonato seems to be quite worried, and lost in all of this, I'd have him missing his cues and forgetting his lines, as this seems very rehearsed. ...read more.

His addition of a prop for Benedick to mess around with, the 'deckchair' is hilarious, just when the interesting parts come up Benedick falls over the deckchair as he hears them. The facial expressions that Beatrice has en cue in her scene are hilarious, her longing looks and reactions cannot be matched. I would be hard pressed without much experience to direct a better garden scene than that in this movie. Both characters, Beatrice and Benedick, are almost given away, when for instance Don Pedro momentarily puts Benedick down by saying Beatrice is wise, 'in everything but in loving Benedick'. This bring out a loud 'bah' from Benedick, which he tries to disguise by making a 'cooing' sound, which I found hilarious. There is nothing in the script that calls for that, and it was just a stroke of genius putting that in. I think that Benedick's almost complete turnaround at the end of act 2 is funny, seeing Benedick wrestle with his self set benchmarks, saying that when he said he'd stay a 'bachelor', it would only be until he got 'married'. Its funny seeing him justify what he said before, just at the beginning of the scene and what he says now. This monologue needs the right reading, with emphasis on 'the world must be peopled'. This is a really funny play, and I think that Beatrice and Benedick bring out most of the comic relief in an otherwise serious play. GCSE English Shakespeare Hasan Haider, 11C 1 ...read more.