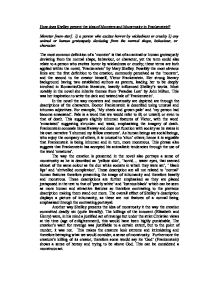 The creature is made to seem more monstrous from this as he is 'born' out of a dark, cold and dreary atmosphere. This imagery is typical of the Gothic genre, which was popular at the time, which often involved stories of monsters. In contrast to this, the author uses the creation's narrative viewpoint to create a feeling of guilt in the reader. Throughout the novel, the creation is constantly being puerile and like a child, with helpless characteristics, 'I felt cold also, and half frightened'. This creates sympathy for the creation, and allows the reader to start understanding, that even though the creature had been perceived as 'evil' and 'monstrous', he is actually quite innocent and the reader does not truly know about the creation. Shelley created the character of the creature to be a 'monstrosity' in the way he looks because she wanted the reader to understand that even though the creation is 'monstrous' in appearance on first impression, people should put aside their prejudice and not immediately place assumptions on a person, therefore making the reader feel guilt towards the creation. This is an example of what happened when the De Lacey family first met the creation. The creation grows an attachment to the De Lacey family whilst he watches and 'studies' them, which can be seen as a human characteristic, therefore creating the idea of more human behaviour than monstrous. ...read more.

This quote also shows pathetic fallacy, as when the sun is shining the creature is happy and joyous - emphasising the creature's humanity. This then makes the point that if the creation had had the guidance and the love and attention, would he have then committed the crimes that he then committed? Where the crimes ultimately Frankenstein's fault through lack of guidance? The disappearance of a parent figure is something that is present in the natural world that we live in. But this is not so in the human way of live. Thus comparing Victor with that of an animal, and therefore monstrous. But we also are made to think that maybe it is not either the creature or Victor that are the monsters in the novel but society itself. As society and it's stigma is responsible for Victor's and the people of the novel's (De Lacey family and others) reaction towards the creature and therefore its mistreatment. Overall, Shelley presents the ideas of monsters and monstrosity in a controversial way, as rather than agreeing with the almost puerile conception that a monster is based on a being's hideous appearance, she diversifies this, showing that the more actual human and accountable, Victor Frankenstein. Can be more monstrous than the creation, simply through the choice and actions that he makes. Therefore its actions and not its exterior define the level of monstrosity within a being. Shelley also portrays the idea of monstrosity through blaming society and its stereotypical views that lead to the ill-treatment of beings. ...read more.

This essay responds superbly to the task. I liked how the argument was made clear in the introduction, looking closely at the definition and connotations of monsters and monstrosity. This task allows the writer to engage with the discussion of ...

This essay responds superbly to the task. I liked how the argument was made clear in the introduction, looking closely at the definition and connotations of monsters and monstrosity. This task allows the writer to engage with the discussion of whether the creature is the monster, or Dr. Frankenstein himself. This sort of insight and perceptive debate will gain credit from the examiners, as it is going beyond simply answering the question by looking at techniques.

The analysis here is strong, as there is a clear focus on the techniques' effects rather than simply stating they are evident. For example when looking closely at the creation scene the choice of words is analysed well, and then the statement "the overall effect of ShelleyÃ¢â‚¬â„¢s description displays a picture of inhumanity" is made. These sort of comments are the ones examiners are looking for, as they want to see how techniques shape meanings rather than read essays simply feature spotting. If I were writing this essay, I would've taken this point further to discuss how this inhumanity affects the reader's perception of both the creature and Frankenstein. This essay's strengths lie with its breadth of points. Many essays at GCSE keep the analysis to a micro level, looking at language alone. However, this essay looks at structure and narrative viewpoint. This paragraph is particularly sophisticated, looking at the guilt evoked in the reader. I liked how this essay refers to Shelley's constructions, saying "Shelley presents the ideas as violent" rather than "the scene is violent". This enables the examiner to see the candidate has a clear understanding of Shelley constructing the novel for a purpose, and this naturally forces you when writing to discuss techniques more deeply.

The structure here is great. There is a clear introduction which engages with the terms in the question, and then a coherent conclusion which weaves together the main points. Each paragraph adds something new, and the signposts are always relevant to the question and concise. The style here makes for a convincing argument, as ideas flow from each other with phrases such as "therefore" and "hence" being used. Spelling, punctuation and grammar are faultless. An essay to be admired!