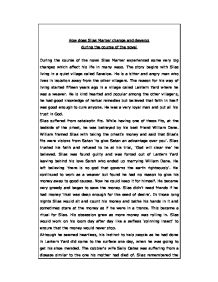 How does Silas Marner change and develop during the course of the novel.

How does Silas Marner change and develop during the course of the novel During the course of the novel Silas Marner experienced some very big changes which affect his life in many ways. The story begins with Silas living in a quiet village called Raveloe. He is a bitter and angry man who lives in isolation away from the other villagers. The reason for his way of living started fifteen years ago in a village called Lantern Yard where he was a weaver. He is kind hearted and popular among the other villagers, he had good knowledge of herbal remedies but believed that faith in itself was good enough to cure anyone. He was a very loyal man and put all his trust in God. Silas suffered from cataleptic fits. While having one of these fits, at the bedside of the priest, he was betrayed by his best friend William Dane. William framed Silas with taking the priest's money and said that Silas's fits were visions from Satan 'to give Satan an advantage over you'. Silas trusted his faith and refused to lie at his trial, 'God will clear me' he believed. Silas was found guilty and was forced out of Lantern Yard leaving behind his love Sarah who ended up marrying William Dane. He left believing 'there is no god that governs the earth righteously'. ...read more.

One day the pot was broken and Silas was devastated. Instead of throwing the pot away he carefully placed it back on the shelf, propping 'the ruin in its old place for a memorial'. This behaviour shows that he had chosen objects as company because they could not hurt him in any way. When returning home from delivering some linen one evening Silas went to collect his money from his hiding place. To his horror the money did not appear to be there 'The sight of the empty hole made his heart beat violently'. This money was Silas's life and everything he had worked so hard for. He was determined that he had misplaced the money 'he turned his bed over and shook it'. It took Silas a very long time for him to get over the loss of his gold. This shows the attachment - possibly obsession - he had to the money. In the hope that his money would return he would frequently go out side and check for any signs of it. He fell into one of his cataleptic fits while outside and a little girl who's mum had died managed to get into Silas's house and fell asleep by his fire. When Silas returned into the house he saw the girl thinking it was his money 'his own gold brought back to him mysteriously' he was amazed and 'his heart beat violently'. ...read more.

She forced Silas out of the house to explore and to meet new people. He started to go back to church and socialise with his neighbours. Silas's gold was gone and had, had no real purpose, but Eppie was alive and needed a different type of attention that brought Silas back into the community. Eppie brought all Silas's old memories back and made him think about living the way he had before and he started to get back into his old habits 'sitting on the banks, Silas began to look for those once familiar herbs'. Silas got very attached to Eppie and started to think of her as his own. She escaped from the loom one day and Silas was heartbroken once again but when he found her he was so relieved 'overcome with convulsive joy at finding his treasure'. Before his treasure had been his gold but now his new treasure was Eppie. When Silas first moved to Raveloe his life was dark and his eyes were narrow looking no further than his gold. He did not want or need friends because he believed they would let him down. Eppie opened his eyes to a new life, one containing happiness and joy 'his large brown eyes seem to have gathered a longer vision as is the way with eyes that have been short sighted in earlier life'. The novel shows that all love should be cherished especially the love for life and happiness that Silas found with Eppie. ...read more.