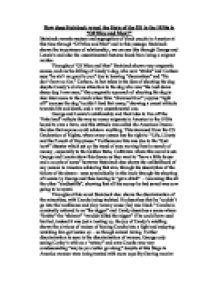 How does Steinbeck reveal the State of the US in the 1930s in Of Mice and Men?

How does Steinbeck reveal the State of the US in the 1930s in "Of Mice and Men?" Steinbeck reveals rascism and segregation of black people in America at this time through "Of Mice and Men" and in this passage. Steinbeck shows the importance of relationship, we can see this through George and Lennie's and also the unsentimental features faced from being a migrant worker. Throughout "Of Mice and Men" Steinbeck shows very pragmatic scenes, such as the killing of Candy's dog, who now "stinks" and Carlson says "he ain't no good to you" due to heaving "rheumatism" and "He don't have no fun." Carlson, in fact takes in the idea of shooting the dog despite Candy's obvious attraction to the dog who was "the best damn sheep dog I ever seen," this pragmatic approach of ...read more.

This stemmed from the US Declaration of Rights, where every person has the right to "Life, Liberty and the Pursuit of Happiness." Furthermore this was due to the "dust bowl" disaster which set up the trend of men moving East in search of money , especially to the Golden State, California where this novel is set. George and Lennie show this dream as they want to "have a little house and a couple of acres" however Steinbeck also shows the unlikelihood of any person in America achieving that aim, through his description of the failure of the dream - seen symbolically in this book through the shooting of Lennie by George and then leaving to "get a drink" - becoming like all the other "bindlestiffs", showing that all his money he had saved was now going to be spent. ...read more.

Further discrimination is seen in the discrimination of women, George only seeing Curley's wife as a "rattrap" and even Crooks was very condescending "maybe you better go along," despite at this Stage in America women were being treated with more equality (having receive the right to vote in 1920). However on farms and in the countryside the values were far more traditional and women were treated as inferior to men (seen also through not naming Curley's wife implying her as almost an object to Curley). In conclusion, "Of Mice and Men" reveals a lot about the state of America in the 1930s, showing the economic crisis and the Depression through the number of migrant workers, and the discrimination of women and blacks as various cultures collided and hierarchies formed at the migrant camps. ...read more.

A well-structured personal response which uses some very good examples to support its points. Extremely good reference to all the elements of drama and staging with these being linked on several occasions to their effect on the audience.

All the main background to the play and its origin is clearly outlined in the introduction. An area for development would be to offer a more detailed synopsis regarding the two men and why they are in the feature and the main differences between both. The writer offers some details regarding the woman in black whilst avoiding spoilers which is also a commendable feature in the response.