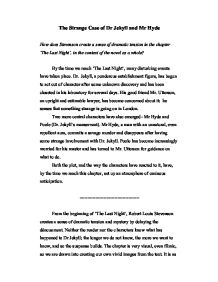 How does Stevenson create a sense of dramatic tension in the chapter The Last Night(TM), in the context of the novel as a whole?

The Strange Case of Dr Jekyll and Mr Hyde How does Stevenson create a sense of dramatic tension in the chapter 'The Last Night', in the context of the novel as a whole? By the time we reach 'The Last Night', many disturbing events have taken place. Dr. Jekyll, a ponderous establishment figure, has begun to act out of character after some unknown discovery and has been closeted in his laboratory for several days. His good friend Mr. Utterson, an upright and estimable lawyer, has become concerned about it: he senses that something strange is going on in London. Two more central characters have also emerged- Mr Hyde and Poole (Dr. Jekyll's manservant). Mr Hyde, a man with an unnatural, even repellent aura, commits a savage murder and disappears after having some strange involvement with Dr. Jekyll. Poole has become increasingly worried for his master and has turned to Mr. Utterson for guidance on what to do. Both the plot, and the way the characters have reacted to it, have, by the time we reach this chapter, set up an atmosphere of ominous anticipation. -------------------------------------- From the beginning of 'The Last Night', Robert Louis Stevenson creates a sense of dramatic tension and mystery by delaying the d�nouement. ...read more.

They are deranged by terror and this again communicates itself to the reader. "...[the] housemaid broke into hysterical whimpering and the cook, crying out "Bless God! It's Mr. Utterson", ran forwards as if to take him in her arms". Like the characters, we still do not know what's causing the disturbance. The lawyer and the butler go into the laboratory building and here Poole gradually reveals his master's strange behaviour in recent days. First, he addresses Dr Jekyll through the closed door to demonstrate to the lawyer that his master's voice has changed. This sets up the reasonable red-herring that he might have been murdered. But why would the murderer remain on the premises? This small detail adds to the tension. ^ (Please ignore the line) ^ Poole goes on to reveal that Dr Jekyll had been trying to secure some drugs yet every time he had claimed them to be: "Impure and quite useless for his present purpose." The note to the chemist "is unquestionably [in] the doctor's hand". This heightens the mystery since if Dr Jekyll has been murdered, how can he still write? Poole then reveals that he has seen the occupant of the room, and that he bore no resemblance to his master - rather, to a monster: "that thing was not my master...My master is a tall fine build of a man, and this was more of a dwarf". ...read more.

When Dr. Jekyll and Mr. Hyde's connection is revealed... To be that they are in fact one and the same. Stevenson reveals this in a way that makes us think of the duality of men, as he would have wanted. He makes us think of the two sides of the same coin in context with many other things, like the beautiful woman and the hag. They are flipsides, but still, of the same coin, so are they all that different? A simple flick shall change them over to what? The same thing, or something else? So, is the reputable Dr Jekyll and Mr. Hyde the same person, or altogether different? Due to the genius and power of Stevenson's writing we find ourselves drawn into the story, as if we were there. The delayed revelation draws us in; it holds us to the page. And stepping back the full horror of the situation becomes apparent. As breaking into a room with a know murderer inside is emotionally charged. Great fiction like this encourages us to 'suspend our disbelief'. In other words, although we know we are reading a novella, we are drawn in to the extent that we believe it to be real. This is particularly obvious in film and it is interesting to see how Stevenson uses visual, audial and dramatic devices to achieve this goal - many years before filmmakers adopted them. ...read more.

The candidate here is answering a question on dramatic tension and it's role in Robert Louis Stevenson's novella 'The Strange Case of Dr. Jekyll and Mr. Hyde'. The candidate expertly retains a consistent focus on the steer of the question ...

The candidate here is answering a question on dramatic tension and it's role in Robert Louis Stevenson's novella 'The Strange Case of Dr. Jekyll and Mr. Hyde'. The candidate expertly retains a consistent focus on the steer of the question on all times. Throughout the answer there is a well-established and well-evidences analysis that shows examiners the candidate possesses and clearly-defined understanding of the novella and it's use of dramatic tension in the specified extracts. It is good to see such a knowledge of the whole text without once diverging and commenting at length on an irrelevant piece of the source material, as this would not be directly answering the question but almost always happens in some respects, so this candidate has done well to avoid it.

The Level of Analysis shown by this candidate is exceptional and should hope to achieve a very high A grade, if not a solid A* grade for GCSE for their efforts. It is often a misconception in any analytical essays that the candidates must display all their knowledge. Well, yes, this is true, but as this candidate demonstrates, all their knowledge is astutely tied back to what the question is asking. They will not comment at length about how Mr. Hyde's appearance reflects the reader's/other characters' opinions of him because it is not entirely relevant to what the question is asking. At all time, must the candidate tie their points back to the question; make a link to show that you are not rambling.
I also enjoy this candidate use of quotes, which are excellently-sourced and entirely appropriate to the points they are trying to prove. The commentary on the use of the supernatural is good, though perhaps a contextual understanding that, at the time the novel was written, religion was a far more potent practice and with it came the belief that magic was considered a possibility by some, so the use of nightmarish metaphors and similes would affect Nineteenth Century readers far more than it would Twenty-First Century readers; the description are far more potently satanic of horrific, and would thus create a greater suspense.

The Quality of Written Communication (QWC) is also very good. There are no spelling mistakes to be found anywhere in this essay, suggesting that this candidate had read and re-read their work to ensure clarity of written expression. It is also good to see a masterful handling of grammar, with a range of sentence syntaxes to create a thoroughly engaging and individual piece of writing. The punctuation used could see a few more instance of complex punctuation like colons, semi-colons and parentheses though, but going by the strength of the answer, these would not greatly improve the overall mark considering the brilliant analysis and prior care taken to ensure high QWC.