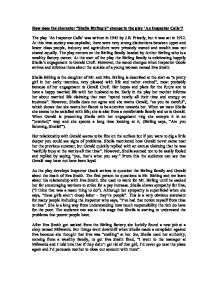 How does the character Sheila Birlings change in the play An Inspector Calls?

How does the character "Sheila Birling's" change in the play 'An Inspector Calls'? The play 'An Inspector Calls' was written in 1945 by J.B. Priestly, but it was set in 1912. At this time society was capitalist, there were very strong distinctions between upper and lower class people, industry and agriculture were privately owned and wealth was not shared equally. The play centers on the Birling family headed by Arthur Birling who is a wealthy factory owner. At the start of the play the Birling family is celebrating happily Sheila's engagement to Gerald Croft. However, the mood changes when Inspector Goole arrives and informs them about the suicide of a young woman named Eva Smith. Sheila Birling is the daughter of Mr. and Mrs. Birling is described at the start as "a pretty girl in her early twenties, very pleased with life and rather excited", most probably because of her engagement to Gerald Croft. Her hopes and plans for the future are to have a happy married life with her husband-to-be. Early in the play her mother informs her about married life claiming that men "spend nearly all their time and energy on business". However, Sheila does not agree and she warns Gerald, "so you be careful", which shows that she wants her fianc� to be attentive towards her. ...read more.

So, Sheila used her authority, coming from a wealthy family, to get Eva Smith fired, "I went to the manager at Milwards and I told him that if they didn't get rid of that girl, I'd never go near the place again and I'd persuade mother to close our account with them". When Sheila hears the news that Eva Smith has killed herself she is devastated. She looks at the photograph of Eva Smith, ("recognizes it with a little cry, gives a half stifled sob, and then runs out"). Her mood also changes and she starts to see things in a different perspective to try and understand the situation and her involvement in it. She regrets what she has done and promises to "never, never do it again to anybody". At this stage the audience sees Sheila as a very honest individual. She admits that she was jealous and that her pride was insulted and that "If she'd been some miserable plain little creature, I don't suppose I'd have done it. But she was very pretty". Eva Smith killed herself because she could not withstand the problems mounting in her life; she had no money, no friends and no family. As Sheila observes everyone's involvement in Eva Smith's downfall she begins to recognize the message behind Inspector Goole's visit to the Birling Family, "Well he inspected us alright". ...read more.

In addition she realizes that her parents do not have a conscience. She tells them, "I'm ashamed of it. But now you're beginning all over again to pretend that nothing much has happened". The parents seem to only care about the knighthood and public scandal. Sheila emphasizes that they "don't seem to have learnt anything". For Sheila, it is not important whether the inspector was real or not, "It doesn't much matter who it was who made us confess.". The important thing to her is that they should have learnt a moral lesson. In addition, Eric has also come to agree with her and realizes his parents' faults, "No, Sheila's right. It doesn't.". Sheila has comprehended that both her parents are immoral and self-centered. To conclude the audience has now started to see Sheila as a thoughtful person. She was the first one to question whether the inspector was real and the first one to realize that they "hardly ever told [the inspector] anything we didn't know". She has a created a new bond with her brother, "That's just what I feel Eric.". Most of all she has rejected her father's view of "every man for himself" and come to see that we are all responsible for the people we come into contact with, whether or not we actually cause someone's death, " If it didn't end tragically, that's lucky for us. But it might have done.". ...read more.

Sheila's responses to the revelations brought by the Inspector are well documented and analysed here, with well-chosen and skillfully-managed references. The essay writer shows us how, in contrast to her family and fiance, Sheila is able to accept her own culpability in the death of this young girl. The conclusion ably sums up the findings of the analysis and expresses Sheila's new-found self-awareness.

Paragraph and sentence construction are mostly well-managed, with only a few lapses in tense form and punctuation, and the lexis is well up to the task.