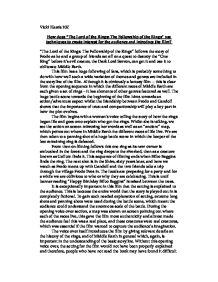 How does &quot;The Lord of the Rings: The Fellowship of the Rings&quot; use techniques to create interest for the audience and introduce the film?

Vicki Harris 10Z How does "The Lord of the Rings: The Fellowship of the Rings" use techniques to create interest for the audience and introduce the film? "The Lord of the Rings: The Fellowship of the Rings" follows the story of Frodo as he and a group of friends set off on a quest to destroy the "One Ring" before it's evil creator, the Dark Lord Savron, can get it and use it to obliterate Middle Earth. This film has a huge following of fans, which is probably something to do with how well such a wide variation of themes and genres are included in the storyline of the film. Although it is obviously a fantasy film - this is clear from the opening sequence in which the different races of Middle Earth are each given a set of rings - it has elements of other genres featured as well. The huge battle scene towards the beginning of the film hints towards an action/adventure aspect whilst the friendship between Frodo and Gandolf shows that the importance of trust and companionship will play a key part in how the plot evolves. The film begins with a woman's voice telling the story of how the rings began life and goes onto explain who got the rings. ...read more.

One example of such a point is shown when the different races of Middle Earth are given a set of rings. Whilst the female voice over is naming the races, the camera is focused in on a circle of rings, and then zooms out slowly, or tilts upwards to show the creatures to which the rings belong. This shows that the rings are more powerful and important than everything else. During the battle scene, the monster that has the ring is only show on screen after a close up of the ring on its finger. Again, showing that the ring is more powerful than even such a huge monster. The importance of the rings is shown using shots that make them shimmer in the light, and look good and pretty. However when the "One Ring" is shown, surrounded by fire, the normal assumption that jewellery is ornate and harmonic is shattered, and we begin to realise that beauty can be misleading. The One Ring is shown hovering in fire, which gives us the realisation that the fire signifies evil, and so, this ring represents elements of the personality of its evil creator. The ten-minute sequence of film that opens documents all the different beings that have had the ring in their ownership. Beginning with the monster, then the victor of the battle, through to Gollum and ending with Bilbo Baggins. ...read more.

Almost everything is grey and there is little detailing on the soldiers because of the shots used. The dark, seemingly boring, colours used in the scene add unrest and anxiousness to the battle. With these sorts of emotions, the audience are almost waiting for a 'twist in the tale' and this comes when the monster with the ring begins battling against the single soldier. This is a great contrast to how the Shire is shown. All the action is filmed using medium shots and close ups which give a more intimate feel, while the filters are much brighter and more natural. As one would expect from a woodland setting, green is the main colour featured, with the blueness of the sky and the vibrant, yet in keeping, colours of the hobbit's clothes all working together to create a happy, relaxed backdrop. Through imaginative use of colours and music, an original take on how to portray different characters and an overall, creative approach to symbolism, "The Lord of the Rings: the Fellowship of the Rings" has the ability to, not only capture audience's imagination, but also maintain it. The film was either going to fail or succeed to such an extent that no one dared expect, mainly due to the cult following the trilogy of books gained. However, the director has made the opening to this film so well that even someone without previous knowledge of the book is able to watch, and fully understand, the film. ...read more.