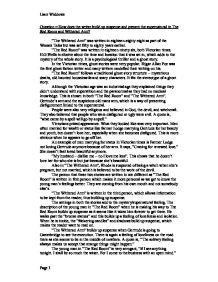 How does the writer build up suspense and present the supernatural in 'The Red Room' and 'Withered Arm'?

Question = How does the writer build up suspense and present the supernatural in The Red Room and Withered Arm? "The Withered Arm" was written in eighteen-eighty eight as part of the Wessex Tales but was set fifty to eighty years earlier. "The Red Room" was written in eighteen-ninety six, both Victorian times. H.G.Wells is elusive about the time and location that it was set in, which adds to the mystery of the whole story. It is a psychological thriller and a ghost story. In the Victorian times, ghost stories were very popular. Edgar Allan Poe was the first ghost fiction writer and many writers modelled their writing on his. "The Red Room" follows a traditional ghost story structure - mysterious deaths, old haunted house/castle and scary characters. It fits the stereotype of a ghost story. Although the Victorian age was an industrial age they explained things they didn't understand with superstition and the paranormal as they had no medical knowledge. This is shown in both "The Red Room" and "The Withered Arm". Gertrude's arm and the suspicious old mans arm, which is a way of presenting disfigurement linked to the supernatural. People were also very religious and believed in God, the devil, and witchcraft. ...read more.

We are almost expecting the young man to meet his downfall. "A monstrous shadow of him crouched upon the wall mocked his action." This shows that his shadow is like a person who is watching his every move. This is a bit like a surveillance camera watching him. This is in "The Red Room". The author uses repetition to get the reader drawn into the short story as the man with the Withered Arm keeps on repeating the line, "it's your own choosing". This line leaves the reader anxious as you wonder what he means by it. Also he won't accept any responsibility if he is harmed. "The Red Room" is decorated in "red" like "red eyes" as it is associated with evil, the devil and blood. It seems as if the old people know what is going to happen as there is a quote saying, "with an intense expression on their ancient faces". The Castle/house has a "Long, draughty subterranean passage" and a "spiral staircase". They both increase the fear of the house/castle because you can't see around a "spiral staircase" and an "underground passage" suggests that the castle is alive or harmful. The suspense in "The Red Room" is largely because of the characters and the descriptions. ...read more.

And "The wind howled". Obviously the wind didn't literally howl. "A slight figure, cloaked and veiled." That is how Gertrude is described. Also shows that there is mystery surrounding her. On the way they hardly spoke to each other because they were preoccupied and nervous. As it says, "they talked monosyllabic." This is just like one word questions and answers. Both "The Red Room" and "The Withered Arm" have hints and secrets which are slowly revealed bit by bit. In "The Red Room" it is the predecessor found dead. The reader wants to read on to find out more about The Red Room as this builds up suspense. In "The Withered Arm", this is again secretive as it starts with the daily routine of milking cows but as you can see there is a mystery about Rhoda and the Farmer so this builds up suspense and you want to carry on reading the book. These two short stories were both written in Victorian times at a time of great superstition. A difference is that "The Red Room" is shorter and you won't get bored reading it. In "The Red Room", the language used to describe the young man making his way to the room is very effective as it shows the sinister feeling in the house and that you wouldn't want to be there. "The echoes rang up and down the spiral staircase." ?? ?? ?? ?? Liam Widdows Page 1 ...read more.