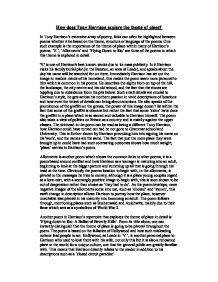 How does Tony Harrison explore the theme of place

How does Tony Harrison explore the theme of place? In Tony Harrison's extensive array of poetry, links can often be highlighted between poems whether it be based on the theme, structure or language of the poems. One such example is the importance of the theme of place within many of Harrison's poems. 'V.', 'Allotments' and 'Flying Down to Rio' are three of the poems in which this theme is explored in detail. 'V.' is one of Harrison's best known works due to its mass publicity. In it Harrison visits his family burial plot (in the Beeston, an area of Leeds), and speaks about the day his name will be searched for on there. Immediately Harrison has set out the image in readers minds of his homeland, this makes the poem seem more personal to him which is common in his poems. ...read more.

The poem also takes a view of politics on Britain as a country and is mainly against the upper classes. The skinhead in the poem can be read as being a different Tony Harrison, how Harrison could have turned out had he not gone to Grammar school and University. This is further shown by Harrison provoking him into signing his name on his 'work', and the names are the same. The fact that just the mere place they were brought up in could have had such contrasting outcomes shows how much weight; 'place' carries in Harrison's poem. Allotments is another poem which shows the common links to other poems, it is a poem based around conflict and how Harrison as a teenager is maturing into an adult, beginning to look at the bigger picture and summing up all that is going through his head at the time. ...read more.

Another poem in Harrison's repertoire that explores the theme of place in detail is 'Flying down to Rio: A Ballad of Beverly Hills'. From its title alone, one can instantly distinguish that the theme of place is going to be pivotal throughout the poem. The poem is based on the fallacies of Hollywood and how such misleading notions lead people to act. Hollywood, as Leeds in 'V.', is another personal place to Harrison who used to love there with his wife, not only this but it is also a renowned place in the world for a unique culture, one that the general public are greatly familiar with. This means that Harrison directly relates to the reader in addition to his descriptions such as a 'closed circuit paradise' Overall, it is apparent by reading a variety of Harrison's works that the theme of place is one which is explored in great detail by him. ...read more.