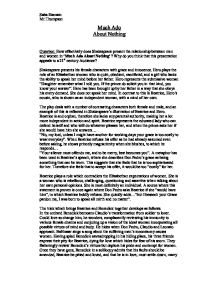 How effectively does Shakespeare present the relationship between men and women in 'Much AdoAbout Nothing'? Why do you think that this presentation appeals to a 21st century Audience?

Much Ado About Nothing Question: How effectively does Shakespeare present the relationship between men and women in 'Much Ado About Nothing'? Why do you think that this presentation appeals to a 21st century Audience? Shakespeare presents his female characters with grace and innocence. Hero plays the role of an Elizabethan woman who is quiet, obedient, sacrificial, and a girl who lacks the ability to speak her mind before her father. Hero represents the submissive woman "Daughter remember what I told you. If the prince do solicit you in that kind, you know your answer". Hero has been brought up by her father in a way that she obeys his every demand. She does not speak her mind. In contrast to this Is Beatrice, Hero's cousin, who is shown as an independent woman, with a mind of her own. The play deals with a number of contrasting characters both female and male, and an example of this is reflected in Shakespeare's illustration of Beatrice and Hero. Beatrice is and orphan, therefore she lacks any parental authority, making her a lot more independent in action and spirit. Beatrice represents the educated lady who can defend herself and who will do whatever pleases her, and when the prince asks her if she would have him she answers... "No, my lord, unless I might have another for working days your grace is too costly to wear everyday". When Beatrice refuses his offer as he had already assumed even before asking, he shows princely magnanimity when she blushes, to which he responds... ...read more.

he loved her. And Benedick "will not be sworn but love may transform me into an oyster". Here Beatrice has clearly said that in her eyes all men are like dogs, as compared to what Benedick says in response that his "...love will transform..." him into an oyster. This is shown as a positive point because oyster produce pearls, therefore he is suggesting that his love are like pearls. A modern audience might look at the play from a feminist perspective and remark upon the fact that women's sexuality is cast in absolute in the play, constructed in terms of the binary oppositions of virgin or "whore". They might also be interested in the exhibition of male insecurities. Elizabethans believe that if a man was 'cuckolded' he would grow a horn on his forehead as it was considered for the greater disgrace for a man if his wife was adulterous that if a man was unfaithful. A woman's sexual purity was vital or then would be socially shunned. Claudio is too quick to judge, demonstrating his male insecurities. Men in Elizabethan time either idolised women regarding then as epitomising purity or condemned them like Claudio does to Hero when he casts doubt on her reputation. Modern audiences have different expectations or courtship and marriage to an Elizabethan one as we believe in having more intimacy and equality than demonstrated here. Although, for an Elizabethan audience, Claudio's and Hero's relationship could have been seen entirely appropriate. ...read more.

When a disguised Don Pedro attempts to woo Hero, she matches wits with him, showing that she is by no means a vapid, powerless female. In response to the masked Don Pedro's requests that she walk with him, Hero makes it clear that she will do so only on her terms, i.e., "so you walk softly, and look sweetly, and say nothing, I am yours for the walk, and especially when I walk away" (II, i., ll. 88-90). Hero is not as pliant to male will as is often supposed; she merely appears that way when set alongside the feistier Beatrice. At the conclusion of the play, Much Ado's two principal female characters---Beatrice and Hero---prepare to wed their respective mates. This is certainly an appropriate end for a comedy in which the relationship between the sexes serves as an overarching theme, and the audiences of Shakespeare's day saw the pre-marital dance as both a happy and a fully expected outcome. But from the standpoint of a modern feminist sensibility, Beatrice and Hero's acceptance of marriage can be interpreted in a highly negative light. Indeed, from a modern feminist perspective, that Beatrice marries a "professed tyrant" of women while Hero weds a man who has inflicted gross humiliation upon her demonstrates that these women are portrayed by Shakespeare as sacrificial women, also women that are obedient and follow orders that were expected from Elizabethan women at that point in time. WORD COUNT = 812 WORDS! Saba Hasnain Mr.Thompson ...read more.