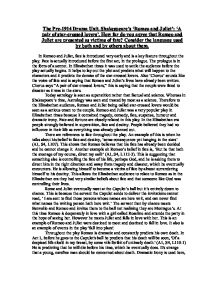 How far do you agree that Romeo and Juliet are presented as victims of fate?

The Pre-1914 Drama Unit. Shakespeare's 'Romeo and Juliet': 'A pair of star-crossed lovers'. How far do you agree that Romeo and Juliet are presented as victims of fate? Consider the language used by both and by others about them. In Romeo and Juliet, fate is introduced very early and is a key feature throughout the play. Fate is actually introduced before the first act, in the prologue. The prologue is in the form of a sonnet. In Elizabethan times it was used to settle the audience before the play actually begins. It helps to lay out the plot and predicts what will happen to the characters and it predicts the demise of the star-crossed lovers. Also 'Chorus' sounds like the voice of fate and is saying that Romeo and Juliet's lives have already been written. Chorus says "A pair of star crossed lovers," this is saying that the couple were fated to disaster as it was in the stars. Today astrology is seen as superstition rather than factual and science. Whereas in Shakespeare's time, Astrology was seen and treated by most as a science. Therefore to the Elizabethan audience, Romeo and Juliet being called star-crossed lovers would be seen as a serious omen to the couple. ...read more.

Another example of this is at the ball. It occurs when Romeo and Juliet first meet at the ball, when neither of them know that the other is from the opposite family and only once they are in love do they realize that they are from the opposite families. On realizing Romeo is a Montague, Juliet says 'Prodigious birth of love it is to me, That I must love a loathed enemy.' The greatest dramatic irony of the play is during Act 5 Scene 3. Romeo finds Juliet dead; this is the peak of the play. This is enhanced by Romeo's actions and words, he says 'Death, that hath suck'd the honey of thy breath, Hath had no power yet up thy beauty: Thou art not conquer'd, beauty's ensign yet.' The final speech sums up his feeling about Juliet and that he is determined to take charge of his own life and fortune as he is in control of his death. Later in the play Juliet talks about fate, 'Can heaven be so envious?' (A3, S2, L40) when the nurse tells her of the death of Tybalt, however Juliet at that time thinks that its Romeo that's dead rather then Tybalt. ...read more.

Shakespeare used suspense a lot in order to stop the crowd from getting bored. There were lots of distractions in the Elizabethan theatre; like food sellers, people talking and mainly heckling. Free will is incorporated in the play. One of the first examples of free will is before the ball, when Romeo eventually decides to go to the ball even though his dreams have told him not too. 'Some consequence yet hanging in the stars shall bitterly begin his fearful date.' He is saying that something bad is in the stars and that they shouldn't go to the ball. Even though he believes this he still chooses to go to the ball. Another indication of free will is at the end of Act 2 Scene 2 when Juliet tells Romeo that she is going to send him a message, she says 'I will not fail.' This is her own doing and cannot be affected by fate or destiny. The final main indication of free will is at the climax. Romeo gives a long speech, 'will I set my everlasting rest, and shake the yoke of inauspicious stars from the world-wearied flesh. Eyes look your last.' He sums up how he is feeling and that he is determined to out do fate and take control of his life for the last time by being in control of his own death. ...read more.