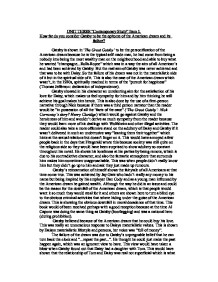 How far do you consider Gatsby to be the epitome of the American dream and its failure?

UNIT THREE "Contemporary Study" Item 1. How far do you consider Gatsby to be the epitome of the American dream and its failure? Gatsby is shown in 'The Great Gatsby' to be the personification of the American dream because he is the typical self made man, he had come from being a nobody into being the most wealthy man on the neighbourhood and able to buy what he wanted "champagne...Rolls-Royce" which was in a way the aim of all American's and had been achieved by Gatsby. But the real aim of Gatsby was never achieved and that was to be with Daisy. So the failure of his dream was not in the materialistic side of it but in the spiritual side of it. This is also the case of the American dream which wasn't, in the 1920s, spiritually reached in terms of the "pursuit for happiness" (Thomas Jefferson: declaration of independence). Gatsby showed in his character an unrelenting aim for the satisfaction of his love for Daisy, which makes us feel sympathy for him and by him thinking he will achieve his goal makes him heroic. ...read more.

shown here to turn a blind eye to the obvious criminal activities that where hiding under the guise of the American dream. This is showing the obvious downfall in moral decadence of that time. This book would of been received perhaps with a good reception because at the time Al Capone was doing the same thing as Gatsby (bootlegging) and was a national hero (during prohibition). Gatsby believed because of the American dream that he could buy his love. This was really an unconscious response to Daisys materialistic values. This is shown by Daisys materialistic lifestyle and persona, her voice was "full of money". The failure of the dream was due to Gatsby's unpregnable belief that he can turn back the clock and "...repeat the past...". He thought he could just make the past happen again, which was an ignorant view to have. This view would have taken a blow when Gatsby found out that Daisy had a daughter with Tom. This would have shown that the relationship of Tom and Daisy was real not superficial which is what Gatsby had believed. ...read more.

The dream represented to Americans a new life of freedom, but in the twenties this was abused and the material side was also over emphasised in real life and in this book. The spiritual side was totally ignored by most and Daisy and Tom who's life's were "filled with material comforts and luxuries,"(commentary sheet) also lost the spiritual side and this is shown to be a bad thing because it had led them into both committing adultery so they were not really in a good relationship if it is based on money. Gatsby is in terms of hope and than failure the total epitome of the American dream and this is conveyed in the last chapter where Fitzgerald writes about Gatsby's dream coming to an end and reflects on all the hope there was from Gatsby for the dream to succeed and then in the same paragraph talks of the hope of the new world that would of befallen the Dutch sailors. The American dream is meant to be the pursuit of happiness and the receiving of it, which wasn't evident with Gatsby in the end. ?? ?? ?? ?? Barrie Panayi ...read more.