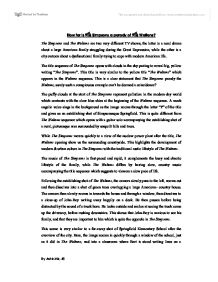 How far is the Simpsons a parody of the Waltons?

How far is The Simpsons a parody of The Waltons? The Simpsons and The Waltons are two very different TV shows; the latter is a rural drama about a large American family struggling during the Great Depression, while the other is a city cartoon about a dysfunctional family trying to cope with modern American life. The title sequence of The Simpsons opens with clouds in the sky parting to reveal big, yellow writing "The Simpsons". This title is very similar to the yellow title "The Waltons" which appears in the Waltons sequence. This is a clear statement that The Simpsons parody the Waltons; surely such a conspicuous example can't be deemed a coincidence? The puffy clouds at the start of The Simpsons represent pollution in the modern-day world which contrasts with the clear blue skies at the beginning of the Waltons sequence. A mock angelic voice sings in the background as the image zooms through the letter "P" of the title and gives us an establishing shot of Simpsonesque Springfield. This is quite different from The Waltons sequence which opens with a guitar solo accompanying the establishing shot of a rural, picturesque area surrounded by unspoilt hills and trees. While The Simpsons moves quickly to a view of the nuclear power plant after the title, The Waltons opening show us the surrounding countryside. ...read more.

As Bart leaves the classroom in a hurry, the image zooms back out and focuses on the school entrance. Then the view pans left to Bart flying gleefully out on his skateboard through the school doors and into the air. This carefully scripted piece identifies Bart as a mischievous and rebellious character, in just a few seconds. Following this is a shot of Homer wearing a protective suit whilst working at the nuclear power plant. As soon as the end-of work whistle goes, he takes off his mask, drops the rod of uranium he is holding and leaves quickly. This scene suggests he is not careful because the rod of uranium is radioactive and potentially fatal. Homer doesn't realise this because he is in a hurry to get home, as is Bart and the whole family as the title sequence progresses. Following the far-away shot of the truck approaching the house, the camera moves to a close-up of John getting out from the truck, before the picture cuts to a shot of Olivia emerging from the house. John smiles at his wife, and she replies by smiling back, showing that family comes first while in The Simpsons, family does not necessarily comes first. After that, there is a shot of Grandma getting up from her seat in the porch and smiling when she sees John, then cutting to a shot of Grandpa chuckling, showing again the strong family bond. ...read more.

Meanwhile, in The Simpsons, the whole family arrives in a disorderly fashion; as Homer gets out of the car, Bart and Lisa pass without greeting him. This is quite different to the Waltons where everyone rushes to meet John as he arrives home showing the difference in unity between the families. The scene then changes to Marge's car coming up the driveway; the point of view shifts to a sight from inside Marge's car as Homer runs through the garage door screaming. Upon entering the house, they run towards the couch to where they all wrestle to get onto the sofa. The shot then finally moves to an extreme close-up of the TV screen before turning black. The whole scene symbolises what modern life in America is all about; getting home and watching TV without showing the family togetherness that is displayed in The Waltons. Close analysis shows us there are subtle differences and similarities between the two that makes it difficult to say The Simpsons weren't influenced by The Waltons. I think that The Simpsons contains too many matching scenes with The Waltons to be coincidences. This leads me to conclude that The Simpsons title sequence includes scenes that mimic The Waltons' opening, some that parody it and others which are meant to show how life in the USA has changed so much in just a short period of time. ?? ?? ?? ?? By Ashir Mir, 4S ...read more.