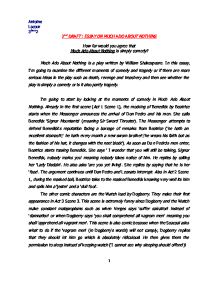 How far would you agree that Much Ado About Nothing is simply comedy?

Antoine Lacour 3�me2 2nd DRAFT : ESSAY ON MUCH ADO ABOUT NOTHING How far would you agree that Much Ado About Nothing is simply comedy? Much Ado About Nothing is a play written by William Shakespeare. In this essay, I'm going to examine the different moments of comedy and tragedy or if there are more serious ideas in the play such as death, revenge and treachery and then see whether the play is simply a comedy or is it also partly tragedy. I'm going to start by looking at the moments of comedy in Much Ado About Nothing. Already in the first scene (Act 1 Scene 1), the mocking of Benedick by Beatrice starts when the Messenger announces the arrival of Don Pedro and his men. She calls Benedick 'Signor Mountanto' (meaning Sir Sword Thruster). The Messenger attempts to defend Benedick's reputation facing a barrage of remarks from Beatrice ('he hath an excellent stomach';' he hath every month a new sworn brother';'he wears his faith but as the fashion of his hat, it changes with the next block'). As soon as Don Pedro's men enter, Beatrice starts teasing Benedick. She says ' I wonder that you will still be talking, Signor Benedick, nobody marks you' meaning nobody takes notice of him. He replies by calling her 'Lady Disdain'. He also asks 'are you yet living'. She replies by saying that he is her 'food'. ...read more.

of flesh as any in Messina'; 'and one that knows the law'; 'a rich fellow enough'; 'one that hath two gowns' (symbol of wealth); 'and everything more handsome about him'). The next comic part of the play is the deception of Benedick (Act 2 Scene 3) and then of Beatrice (Act 3 Scene 1). During the deception of Benedick, Claudio, Leonato and Don Pedro talk about Beatrice's many qualities and how she loves Benedick but she doesn't want to tell him of her passion for him ('DON PEDRO : Hath she made her affection known to Benedick? LEONATO : No; and swears she never will: that's her torment.'). This is comic because Benedick believes what the three men are saying immediately (speech) and because at the end, Beatrice comes to bod him to come to dinner : he tries to find a sign of affection and amazingly finds one ('Ha! 'Against my will I am sent to bid you come in to dinner;' there's a double meaning in that 'I took no more pains for those thanks than you took pains to thank me.' that's as much as to say, Any pains that I take for you is as easy as thanks. If I do not take pity of her, I am a villain; if I do not love her, I am a Jew. I will go get her picture.) ...read more.

Behold how like a maid she blushes here! O, what authority and show of truth. Can cunning sin cover itself withal! Comes not that blood as modest evidence To witness simple virtue? Would you not swear, All you that see her, that she were a maid, By these exterior shows? But she is none: She knows the heat of a luxurious bed; Her blush is guiltiness, not modesty.'). He accuses her of having a relationship with an other man and Don Pedro supports him. Hero is absolutely innocent of course but she is so surprised by Claudio's words that she faints (in many productions...). Leonato doesn't believe Claudio at first but when he sees that even Don Pedro supports his views, he himself turns against his daughter claiming she lost her reputation. The friar then advises that Hero should be reported dead until the affair is uncovered. This is the most tragic moment of the play. There are also more serious ideas in the play such as revenge. At the begging of the play, we learn that Don John had fought against his brother Don Pedro. The plots against Hero and Claudio he imagine s along with Borachio (which I have mentioned earlier) is revenge for his defeat against Don Pedro. Also in this play the police is never taken seriously mainly because of Dogberry's many malapropisms and because of his incompetence. All this shows the Much Ado About Nothing is not only comedy but also tragedy because of the Don John plot, Hero's death and Claudio's flaw. This play is more like tragi-comedy. 4 ...read more.