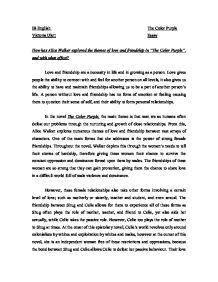 How has Alice Walker explored the themes of love and friendship in &quot;The Color Purple&quot;, and with what effect?

IB English The Color Purple Victoria Ulett Essay How has Alice Walker explored the themes of love and friendship in "The Color Purple", and with what effect? Love and friendship are a necessity in life and in growing as a person. Love gives people the ability to connect with and feel for another person on all levels, it also gives us the ability to have and maintain friendships allowing us to be a part of another person's life. A person without love and friendship has no form of emotion or feeling causing them to question their sense of self, and their ability to form personal relationships. In the novel The Color Purple, the main theme is that man we as humans often defeat our problems through the nurturing and growth of close relationships. From this, Alice Walker explores numerous themes of love and friendship between vast arrays of characters. One of the main forms that she addresses is the power of strong female friendships. Throughout the novel, Walker depicts this through the women's needs to tell their stories of hardship, therefore giving these women their chance to survive the constant oppression and dominance forced upon them by males. The friendships of these women are so strong that they can gain protection, giving them the chance to share love in a difficult world full of male violence and dominance. ...read more.

The two women eventually make love in which Celie says, "I cry and cry and cry", this intimacy and love for Shug allows Celie to be closer to and endure Mr. both emotionally and physically, therefore eventually leading to them having a friendship. The theme of love and friendship is further demonstrated in the relationship between Celie and Mr. It is portrayed as questionable to a modern society, because of the constant exploitation (both physical and emotional) Celie has endured from Mr. At the outset of their relationship there was no love or friendship, Mr simply married Celie because "She'd come with her own linen. And she [could] take that cow...". It is evident when reading the novel at the beginning that Mr treats her like slave as a white man would to a black man, he also makes her do all of the housework and raise his abusive children and forces her to have sex with him. If Celie does not conform to any of his demands, he beats her, and Celie obeys this and thinks it is her place when "Sometimes he beat me anyhow...whether I do what he say or not." Nonetheless, as Celie grows closer to standing up for herself, and with the help of Shug, she finds years of letters from her sister Nettie, which Mr has been hiding away. ...read more.

The fact that Harpo is feminine, Sofia masculine, and that one feels the need to commit to a role that the other does not, proves the balance between the two, and love they have for each other. This is further proved after Sofia leaving Harpo when "Harpo sit on the steps acting like he don't care". All of the words in this sentence are sharp and monosyllabic, showing that he is cut up and suppressing his true feelings. Later in the novel, as Harpo is making a net, we see a comparison to the previous sewing of the quilt between Celie and Sofia in which they were symbolically making a friendship, he is doing it because he wants to mend his errors and embrace the love again. It is also evident that Sofia still loves Harpo because of the difficulty she had when leaving, and the few significant items she took which I believe contained loving memories. The effect that Alice Walker gave to the reader when exploring the themes of love and friendship was one of deeper knowledge. As the reader learnt about and began to understand these themes, they could empathise with them because love and friendship are fundamental to survival. Without love and friends we are nothing, and as all of these characters that experienced these themes grew, so did we as readers because we could relate. Word count: 1,279 ...read more.