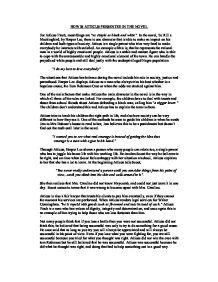 How Is Atticus Presented In the Novel?

HOW IS ATTICUS PRESENTED IN THE NOVEL For Atticus Finch, most things are "as simple as black and white". In the novel, To Kill a Mockingbird, by Harper Lee, there is one character that is able to make an impact on his children and both types of society. Atticus is a single parent who tries very hard to make everybody he interacts with satisfied. An example of this is; that he represents the rational man in a world of highly emotional people. Atticus is a stable and mature figure who is able to cope with the unreasonable and highly emotional element of the town. He can handle the prejudiced white people and still deal justly with the underprivileged Negro population. "I do my best to love everybody" The situations that Atticus has balance during the novel include his role in society, justice and parenthood. Harper Lee displays Atticus as a man who always tries his best whether in a hopeless cause; the Tom Robinson Case or when the odds are stacked against him. ...read more.

She then realises that Mrs. Caroline did not know Maycomb, and could not just learn it in one day. Scout comes to terms that it was wrong to become upset with Mrs. Caroline. Atticus is also a fair lawyer that trusts his clients to pay him eventually, even if they cannot the moment his services are performed. When Atticus renders legal services for Walter Cunningham, "he is repaid with goods such as firewood and nuts instead of cash." Atticus Finch is a man who has values of dignity, integrity and determination, and once again this is an example of him trying to help those who are less fortunate than him. ` Not many people think that if you lose a battle then you were not successful. Atticus did not think this; he believed that being successful was only to try to do something for a good cause. He once said that as long as you try you will always be appreciated and will always be successful in his point of view. ...read more.

Atticus tells his children that it; "is a sin to kill a mockingbird." Later Miss Maudie explains that Atticus meant that Mockingbirds are harmless creatures who do nothing but sing for enjoyment. This is once again an example of how Atticus tries to teach his children, and even though he doesn't agree with violence, he buys the rifles for his children, knowing it's what they wanted. Another part of Atticus' persona includes his ability to perform under pressure. During the trial, Scout says that Atticus makes the trial boring, but Atticus is tranquil and composed in his approach to the trial. "Atticus was proceeding amiably...With his infinite capacity for calming turbulent seas, he could make a rape case as dry as a sermon." Through Atticus, the author displays the one person who can be level-headed throughout and despite all the pressure he is under, and the abuse he has had to put up with; he can still fight to the end for what he believes to be right. ...read more.