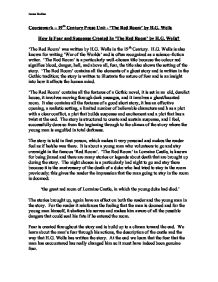 Coursework - 19th Century Prose Unit - 'The Red Room' by H.G. Wells How Is Fear and Suspense Created In 'The Red Room' by H.G. Wells? 'The Red Room' was written by H.G. Wells in the 19th Century. H.G. Wells is also known for writing 'War of the Worlds' and is often recognized as a science-fiction writer. 'The Red Room' is a particularly well-chosen title because the colour red signifies blood, danger, hell, and above all, fear, the title also shows the setting of the story. 'The Red Room' contains all the elements of a ghost story and is written in the Gothic tradition; the story is written to illustrate the nature of fear and is an insight into how it affects the human mind. 'The Red Room' contains all the features of a Gothic novel, it is set in an old, derelict house, it involves moving through dark passages, and it involves a ghost/haunted room. It also contains all the features of a good short story, it has an effective opening, a realistic setting, a limited number of believable characters and has a plot with a clear conflict, a plot that builds suspense and excitement and a plot that has a twist at the end. ...read more.

When the young man leaves the room they all huddle together and none of them look him in the eye. This could be because they know that he is doomed and do not want him to think that they are responsible for him; also it stops them having to say goodbye to him. Lastly it could be a sign to him that he is on his own. Whenever any one of the three old people speaks they leave sentences unfinished and open to interpretation. Everything about the old people is depressing, dismal, drab and dreary. The young man finds the old people who look after the castle, frightening and depressing. We know this because he refers to them as 'grotesque custodians'. He also says that he 'will relieve you from the task of entertaining' him, meaning that he feels himself a burden Once he has left the room he describes his feelings when he was 'in the company of the old people. He calls them odd and the surroundings that they were 'ghostly'. He then banishes all thoughts of ghosts from his mind so as not to distract him from the long walk through the 'chilly, echoing passage.' ...read more.

The paragraphs from when the first candle goes out to when he is knocked out are extremely tense. They involve a lot of short sentences to increase and sustain tension and suspense. The climax of the story is when the last few candles begin to go out. When he has recovered from his fall he awakens in daylight, which is a sharp contrast to the darkness in the room. He appears to have become a better person from his experience and he tells the old people that it is fear in the room, an emotion, nothing supernatural at all. His final words are among the most powerful in the story, they are also among the most crucial, he says that fear is much worse than anything supernatural for it is inside you and always will be, 'so long as this house of sin endures.' As mentioned before, this 19th Century novel contains all the elements of a traditional ghost story. The language throughout is typical of the time genre in which it was written, the Victorian language is used for emotive and figurative effect and adds to the spooky creepy atmosphere that runs throughout. The story is extremely effective in putting the story across and the theme is often reflected in today's world. James Budden ...read more.