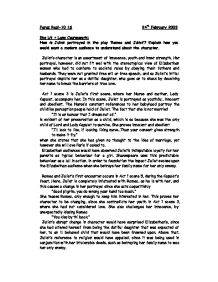 How is Juliet portrayed in the play 'Romeo and Juliet'? Explain how you would want a modern audience to understand about the character.

Faraz Razi-10 1S 24th February 2003 Eng Lit + Lang Coursework: How is Juliet portrayed in the play 'Romeo and Juliet'? Explain how you would want a modern audience to understand about the character. Juliet's character is an assortment of innocence, youth and inner strength. Her portrayal, however, did not fit well with the stereotypical view of Elizabethan women who had to conform to societal rules by obeying their fathers and husbands. They were not granted free will or free speech, and so Juliet's initial portrayal depicts her as a dutiful daughter, who goes on to shock by deceiving her name to break the barriers of true love. Act 1 scene 3 is Juliet's first scene, where her Nurse and mother, Lady Capulet, accompany her. In this scene, Juliet is portrayed as youthful, innocent and obedient. The Nurse's constant references to her babyhood portray the childlike perception people hold of Juliet. The fact that she is not married "It is an honour that I dream not of." is evident of her preservation as a child, which is so because she was the only child of Lord and Lady Capulet to survive. She proves innocent and obedient "I'll look to like, if looking liking move...Than your consent gives strength to make it fly." ...read more.

The contrast to her former portrayal continues, as Juliet speaks passionately of Romeo, despite his slaying of her cousin Tybalt "O serpent heart, hid with a flow'ring face! Did ever a dragon keep so fair a cave? Beautiful tyrant, fiend angelical-" She wishes to curse Romeo for his part in Tybalt's death, but cannot bring herself to do so. Instead, Juliet ends up using a vast variety of oxymoron's to depict her undisputable love for Romeo, contradicting all the while with her initial youth that was her insignificance with love. Juliet's arrogant and impatient depiction in this scene was not the stereotypical nature of Elizabethan women. It would have appalled, since rather than waiting for Romeo to approach her-without free speech, she questioned Elizabethan woman's rights by taking it upon herself to resolve her state of affairs with him. In Act 3 scene 5, Juliet conveys a bleak contrast in behaviour to that of her initial portrayal. She display wilfulness, as opposed to her preliminary innocence, during her combat with her father over the prospect of her marriage with Paris "Now by Saint Peter's Church, and Peter too, He shall not make me there a joyful bride!" Much to the discontent of her father, Juliet refuses to marry Paris. Her unruly behaviour continues through means of oppressive shouting, causing Lord Capulet to resort to verbal threats "I tell thee what: get thee to Church a Thursday, Or never after look me in the face!" ...read more.

Come, go, good Juliet. I dare no longer stay!" as she stands firm in the presence of the tomb watchmen. Her uncanny behaviour continues, as her infatuation with Romeo empowers her to kiss his lips for poison "I will kiss thy lips. Haply some poison yet doth hang on them." To no avail, Romeo has drunk the last drop of poison, leaving none for Juliet to accompany him after death. Due to emotions of apprehension and passion, Juliet defies all barriers of love by boldly stabbing herself, furthermore sacrificing her life to be with Romeo; her one true love "O happy dagger, This is thy sheath. There rust, and let me die." Juliet's disregard for her father's will of her marriage with Paris was not at all pleasing to the Elizabethan's. For her to cunningly defy his power as a father in order to be with whom she loved was intolerable. She had not behaved as expected, and for that she would not have been accepted in Elizabethan society. As well as that, her act of suicide displeased God, therefore displeased the greatly religious Elizabethan's. Back then; Juliet's suicide would have caused uproar. To conclude, I think Juliet was initially portrayed as a youthful, innocent child, and as her intolerable love for Romeo progressed, her inner strength and belief in what was right developed her into the mature, wilful young woman who died for her true feelings. I will have my final draught handwritten ...read more.