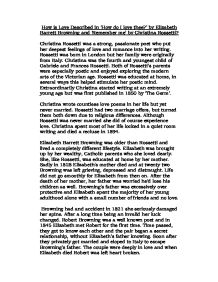 How is Love Described in 'How do I love thee?' by Elizabeth Barrett Browning and 'Remember me' by Christina Rossetti?

How is Love Described in 'How do I love thee?' by Elizabeth Barrett Browning and 'Remember me' by Christina Rossetti? Christina Rossetti was a strong, passionate poet who put her deepest feelings of love and romance into her writing. Rossetti was born in London but her family were originally from Italy. Christina was the fourth and youngest child of Gabriele and Frances Rossetti. Both of Rossetti's parents were especially poetic and enjoyed exploring the modern arts of the Victorian age. Rossetti was educated at home, in several ways this helped stimulate her poetic mind. Extraordinarily Christina started writing at an extremely young age but was first published in 1850 by 'The Germ'. Christina wrote countless love poems in her life but yet never married. Rossetti had two marriage offers, but turned them both down due to religious differences. Although Rossetti was never married she did of course experience love. Christina spent most of her life locked in a quiet room writing and died a recluse in 1894. Elizabeth Barrett Browning was older than Rossetti and lived a completely different lifestyle. Elizabeth was brought up by her wealthy, Catholic parents who she loved dearly. ...read more.

In the next two lines she explains how it's too late to get help or advice she just wants him to remember her. After that she becomes dominant and commands her man by saying "do not grieve"; she didn't want her lover to be upset. She then tells him that if "the darkness and corruption leave" and her illness worsen, her behaviour will change. She's saying sorry if her mental state deteriorates. In the last three lines she comes to a tearful conclusion. "Better by far that you should forget and smile than that you should remember and be sad" she knew she was going to die and she didn't want anyone to be miserable in life. 'How do I love thee?' is a beautiful poem that could be mistaken for a very poetic list. The poem starts with "How do I love thee? Let me count the ways" she then goes on to answer the title question. "I love thee to the depth and breadth and height" there she is saying she is full of love for her husband. She truly loves her man and we know this because she says "I love thee to the level of every day's" she obviously loves him to the ends of the earth. ...read more.

The poem uses personification to express her love in an abstract way. A capital letter twice in mid sentence is used to indicate the importance to Elizabeth. Strangely the first eight lines of the poem refer to the present where as the last six lines refer to her past. Flowing loaded words are used to highlight significant points in the poem. This sonnet structure is also fluid with two half rhymes to make it different. The rhyming scheme for this poem is A, B, B, C, A, B, B, A, D, E, D, E, D, E. This rhyming scheme reminds me of rain falling gracefully down a wide open road because of the calmness of the poem. This poem is extremely full of love and joy. In conclusion, Browning's poem is successful because it used powerful emotive language and had an advanced use of detail in it. Rossetti's poem is successful because it uses death in a love poem which can be exceedingly difficult to do. Rossetti's poem is very morbid but has a joyful outlook to the future. Browning's poem is very cheerful and expresses love to the maximum of levels. Both poems are very good in quality and description and both have a great use of rhetorical devices. Rossetti and Browning were fantastic writers and the world is lucky to of had them walk the planet. ...read more.