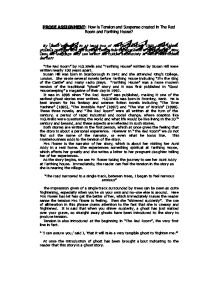 How is Tension and Suspense created in The Red Room and Farthing House?

PROSE ASSIGNMENT: How is Tension and Suspense created in The Red Room and Farthing House? By direct reference to at least two of the pre and post 1900 short stories studied, compare how the authors create fear and suspense in their writing. How does the language they use reflect the culture and society in which their stories are set? "The Red Room" by H.G.Wells and "Farthing House" written by Susan Hill were written nearly 100 years apart. Susan Hill was born in Scarborough in 1942 and she attended King's College, London. She wrote several novels before Farthing House including "I'm the King of the Castle" and many radio plays. "Farthing House" was a more modern version of the traditional "ghost" story and it was first published in "Good Housekeeping" a magazine of their day in 1992. It was in 1896 when "The Red Room" was published, making it one of the earliest ghost stories ever written. H.G.Wells was born in Bromley, Kent. He is best known for his fantasy and science fiction novels including "The Time Machine" (1895), "The Invisible Man" (1897) and "The War of Worlds" (1898). These three novels, and "The Red Room" were all written at the turn of the century, a period of rapid industrial and social change, where sceptics like H.G.Wells were questioning the world and what life would be like living in the 20th century and beyond, and these aspects are reflected in such stories. Both stories are written in the first person, which at once gives the feeling that the story is about a personal experience. However in "The Red Room" we do not find out the name of the narrator, or even what he looks like. This mysteriousness adds to the tension of the story. Mrs Flower is the narrator of her story, which is about her visiting her Aunt Addy in a rest home. ...read more.

Candlelight is constantly referred to throughout the story, but the seventeen candles he had in the Red Room now become the subject of the dramatic happenings of the night. "It was after midnight that the candle in the alcove suddenly went out, and the black shadow sprang back to its place there" The fact that the candle went out after midnight adds more tension to the story, as the 'midnight hour' is considered to be the hour of supernatural happenings. " 'By Jove!' said I aloud; 'that draught's a strong one!' " Here we see the sceptic trying to reassure himself by talking aloud to break the silence and blaming the candle being extinguished on a draught. He goes to relight the candle but notices other candles going out, one after the other. "The flame vanished, as if the wicks had been suddenly nipped between a finger and thumb, neither glowing or smoking, but black" The fact that the wick was neither glowing, nor smoking, creates tension and suspense as a candle always does that just after being put out, it doesn't go black straight away. This plants ideas in the reader's mind that maybe only something supernatural could have put that candle out, not simply a harmless draught. As they all begin to go out, one after the other, he tries to relight them, but in vain as it comes to a point where he cannot keep up with the pace and he begins to get hysterical. The way in which the paragraph is written paints the image that the sceptic is fighting against a supernatural force, and this effectively creates tension and suspense for the reader as they wait to see if he wins or loses against the "shadows" " 'What's up?' I cried, with a queer high note getting into my voice somehow" " 'I was now almost frantic with horror at the coming darkness, and my self possession deserted me. ...read more.

It is much more difficult to read than the familiar, chatty and conversational language used in "Farthing House", and because the reader has to concentrate, it generates tension. "The Red Room" builds up tension throughout the story with the climax at the end. This effectively builds suspense and tension, as the reader will want to read right to the end to find out what happens. Also the fact that the mysterious and supernatural happenings are never actually fully explained leaves the reader's imagination to run wild and think abut all the possibilities of what was really in that room. Was it fear, as the young sceptic insisted, or something else more sinister? "Farthing House", however builds up tension in a different way. Tension is built up in a series of peaks, which then subsides. This isn't as effective as having the big climax at the end, as in "The Red Room", in my opinion. Also, the climax at the end of "Farthing House" gradually fades, as we are given an explanation for the haunting, giving the reader a sense of completeness and resolution. In my opinion, I don't think this would leave as great an impact on the reader than a open ending that asks many questions, as in "The Red Room". I think "Farthing House is more of a phycoloc=gical ghost story to make you think and create tension and suspense that way, whereas "The Red Room" is a traditional ghost story written to scare people and create tension and suspense in different, more traditional ways (eg. Old language, derelict castle setting etc...) People love ghost stories, they love the fact that they can feel tense and be kept in suspense by reading ghost stories, because of the idea that there is more to life than meets the eye. Virginia Woolf picked up on this: "the strange human craving for the pleasure of feeling afraid" "The Red Room" proves, that even after a hundred years, the traditional formulistic ghost stories are often the most effective in delivering 'the pleasure of feeling afraid' that we crave for. By Vicki Vinton ...read more.