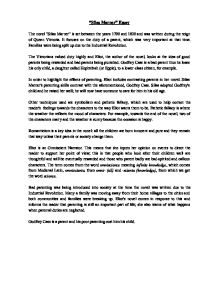 How Is The Importance Of Doing Your Duty As A Parent Highlighted In The Novel &quot;Silas Marner&quot;?

"Silas Marner" Essay The novel "Silas Marner" is set between the years 1790 and 1820 and was written during the reign of Queen Victoria. It focuses on the duty of a parent, which was very important at that time. Families were being split up due to the Industrial Revolution. The Victorians valued duty highly and Eliot, the author of the novel, looks at the idea of good parents being rewarded and bad parents being punished. Godfrey Cass is a bad parent thus he loses his only child, a daughter called Hephzibah (or Eppie), to a lower-class citizen, for example. In order to highlight the effects of parenting, Eliot includes contrasting parents in her novel. Silas Marner's parenting skills contrast with the aforementioned, Godfrey Cass. Silas adopted Godfrey's child and he raised her well; he will now have someone to care for him in his old age. Other techniques used are symbolism and pathetic fallacy, which are used to help correct the reader's feelings towards the characters to the way Eliot wants them to be. Pathetic fallacy is where the weather the reflects the mood of characters. For example, towards the end of the novel, two of the characters marry and the weather is sunny because the occasion is happy. Romanticism is a key idea in the novel: all the children are born innocent and pure and they remain that way unless their parents or society change them. Eliot is an Omniscient Narrator. This means that she inputs her opinion on events to direct the reader to support her point of view; this is that people who look after their children well are thoughtful and will be eventually rewarded and those who parent badly are bad-spirited and callous characters. ...read more.

Although Godfrey appears to be mean and selfish most of the time, there could be an unavailing tender heart within him. He is evidently a weak character who tends not to show true feelings and showing affection for an anonymous baby brought up by a drug addict would not be very masculine and might appear weird in the eyes of others. Either way, Godfrey quickly asked if Silas would take Hephzibah to the parish or the workhouse. The workhouses were places where very poor people could work in exchange for free food and accommodation. The conditions were deliberately made to be extremely harsh so that idle poor people would not rely on them; the working hours were long, at about 10 per day. By entering a workhouse a pauper was assumed to have forfeited responsibility for his children. Godfrey knew that if he could find a way for her to become a worker in a workhouse, he could cease his duties over her (not that he did them anyway), he would never see her again but she would die a ghastly death. Evidently, he was still prepared to see her go there. Although, Godfrey did have some reluctance to let her go there as he tried to speak, "as indifferently as he could." Nonetheless, his reputation was more important to him and he had to keep all emotion he felt for Eppie a secret otherwise it would have become prominent that the child was his, which he did not want under any circumstances. Despite the fact that he had strong feelings for his child, he was not acting upon them. ...read more.

He has finally said no and "with a keen decisiveness of tone." He is being strong and going against what other people around him (namely Nancy) say. He has realised what is wrong. Rather than just saying the right thing this time, he acted upon it by deciding not to tell Eppie that the innocent childhood pictures of her mother were false and that her mother was a hideous drug-addict. He thought, "where would be the good to anybody?" Godfrey was, however, for the most part of his life a bad parent and he has been punished by losing the only child he has to a weaver. He is now childless. Parts of the novel are a moral fable and parts are realistic because Godfrey was punished by having no children and Silas Marner and Eppie were rewarded: Silas adopts a beautiful, female child who will look after him in his old age and Eppie gets a loving husband - they marry on a sunny day. Dolly, who helped integrate Silas into the community, from what we can tell, receives the same fate as Silas. Howbeit, not everyone got rewarded and punished justifiably. Nancy does not have any children at all, despite the fact she was a lovely woman. She may have attempted to take Eppie off Silas but she was trying to get Godfrey to do his parental duties, which is the right thing to do. Mr Lammeter, Nancy's father, would have loved to have been a grandfather but never became one; Priscilla, his other daughter, did not marry at all. Eliot is saying that life is not always fair but parenting is nonetheless an important job. ...read more.