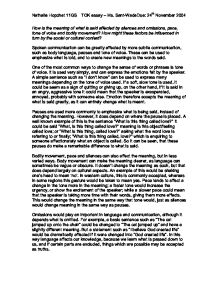 How is the meaning of what is said affected by silences and omissions, pace, tone of voice and bodily movement

How is the meaning of what is said affected by silences and omissions, pace, tone of voice and bodily movement? How might these factors be influenced in turn by the social or cultural context? Spoken communication can be greatly affected by more subtle communication, such as body language, pauses and tone of voice. These can be used to emphasize what is told, and to create new meanings to the words said. One of the most common ways to change the sense of words or phrases is tone of voice. It is used very simply, and can express the emotions felt by the speaker. A simple sentence such as "I don't know" can be used to express many meanings depending on the tone of voice used. ...read more.

Omissions would play an important in language and communication, although it depends what is omitted. For example, a basic sentence such as "The cat jumped up onto the chair" could be changed to "The cat jumped up" and have a slightly different meaning. But a statement such as "I believe God created life" would be dramatically affected if it were changed into "God created life". In this way language affects our knowledge, because we learn what is passed down to us, and if certain parts are excluded, things which are possible may be accepted as truths. Therefore, physical communication such as gesticulation, or other methods such as pausing and tone of voice can have a great affect on the meaning of words and how they are interpreted. Nathalie Hopchet 11GS TOK essay - Ms. Sant-Wade Due: 24th November 2004 ...read more.