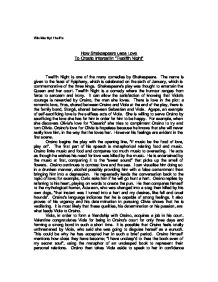 How Shakespeare uses Love To Create Interest in &amp;#147;Twelfth Night

Win Mar Kyi 11a/Pa How Shakespeare uses Love To Create Interest in "Twelfth Night" Twelfth Night is one of the many comedies by Shakespeare. The name is given to the feast of Epiphany, which is celebrated on the sixth of January, which is commemorative of the three kings. Shakespeare's play was thought to entertain the Queen and her court. Twelfth Night is a comedy where the humour ranges from farce to sarcasm and irony. It can allow the satisfaction of knowing that Viola's courage is rewarded by Orsino, the man she loves. There is love in the plot: a romantic love, Eros, shared between Orsino and Viola at the end of the play, there is the family bond, Storg�, shared between Sebastian and Viola. Agape, an example of self-sacrificing love is the selfless acts of Viola. She is willing to serve Orsino by sacrificing the love she has for him in order for him to be happy. For example, when she discovers Olivia's love for "Cesario" she tries to compliment Orsino to try and turn Olivia. Orsino's love for Olivia is hopeless because he knows that she will never really love him, in the way that he loves her. ...read more.

Malvolio follows Viola into act 2 scene 2, where Viola notes the irony that is effortless in her situation. It takes a while for her to realise that that Olivia is in love with Cesario, who the audience know to be Viola. This is an example of dramatic irony that will cause confusion throughout the play but viola sees how her disguise will cause problems also in her relationship with Orsino and will hold her back from expressing her true feelings for him. She notes this inconvenient contradiction, "as I am man, my state is desperate for my master's love", but, "as I am woman, what thriftless sighs shall poor Olivia breathe?" Viola also knows that Olivia could fall in love with Cesario so easily, she compares women's hearts to wax that sets in moulds, "In women's waxen hearts to set their form!" This is an appropriate metaphor and observes how easily the "proper false" leaves an impression in women's hearts. Viola seems to be predicting a confrontation, perhaps, between Orsino and Olivia about her true identity and I feel that she seems reluctant to disappoint either of them. Viola now has the knowledge that Olivia loves her. ...read more.

Again, I find it interesting that these declarations are not treated like they are unusual or scandalous. Maybe the quick sequence of action means that the characters and the audience do not have time to dwell on the issue. Orsino's feelings are revealed when Viola's identity is revealed, he proposes. There is a great amount of dramatic irony in the scene. It is used cleverly to add tension to Olivia's bombshell about her marriage and of the reunion of the twins. The audience are aware that Olivia has married Sebastian and that both twins are alive and well though there is still some suspense as they wait for the characters to find out the truth for themselves. Shakespeare uses the dramatic irony of this scene to provide some humour while at the same time drawing deep emotions from the characters. Viola casts off Olivia, which then leads to the claim that Olivia and Viola are married. This is amusing because of the strangeness of the situation and the fact that the audience already know what has happened. Viola is confused by Olivia's persistence and by Orsino's anger. The actions are dramatic as far as the characters are concerned but funny for the audience. It is a great skill of Shakespeare's that prevents the elements of a tragedy and a comedy from clashing. ...read more.