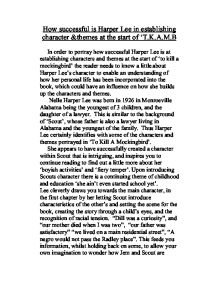 How successful is Harper Lee in establishing character &amp; themes at the start of to kill a mockingbird.

How successful is Harper Lee in establishing character &themes at the start of 'T.K.A.M.B In order to portray how successful Harper Lee is at establishing characters and themes at the start of 'to kill a mockingbird' the reader needs to know a little about Harper Lee's character to enable an understanding of how her personal life has been incorporated into the book, which could have an influence on how she builds up the characters and themes. Nelle Harper Lee was born in 1926 in Monroeville Alabama being the youngest of 3 children, and the daughter of a lawyer. This is similar to the background of 'Scout', whose father is also a lawyer living in Alabama and the youngest of the family. Thus Harper Lee certainly identifies with some of the characters and themes portrayed in 'To Kill A Mockingbird'. She appears to have successfully created a character within Scout that is intriguing, and inspires you to continue reading to find out a little more about her 'boyish activities' and 'fiery temper'. Upon introducing Scouts character there is a continuing theme of childhood and education 'she ain't even started school yet'. ...read more.

The reader should think Harper Lee was very successful in establishing Scout's unique character. Within the first couple of chapters of the book you have a clear image of Scout and her personality. In establishing Scouts character there are many themes introduced, racism, family, community, childhood, friendship and education. Jem's character has been an ongoing establishment as the story is written when Jem is ten and finishes when he is thirteen. During this time he approaches adolescence and matures away from Scout "during school hours I was not to bother him". In the start of the book he enjoys playing football and other childish games with Dill and Scout but as the story unfolds Jem prefers to be on his own. Jem is portrayed as very mature but Scout and Dill like to think he's just scared "you're still scared", Jem reacted bravely to this comment thinking that he'll prove Dill wrong, "Jem wanted Dill to know once and for all that he wasn't scared of anything". Jem's character has been well established as older brother to Scout, although their relationship is built upon in each chapter, with the protective element coming from Jem over his little sister. ...read more.

Not like a lady sewed em". Jem and Dill are very surprised and curious about Boo, whether he is kind or nasty there is evidence on both sides though, like Boo stabbed his father in the leg which is a act of hatred yet boo places gifts in the tree for the children which is act of kindness. Harper Lee is very successful in establishing Boo's strong mysterious character, she has also integrated many themes while describing Boo's character like mystery, friendship, and hatred. The themes to do with Boo are very important throughout the book. Atticus Finch, the father of Scout and Jem, plays a main role in this book. He is the only lawyer in Maycomb to defend a Negro. Harper Lee gives us a fair understanding of him within the first page "our father said we were both right" this tells us that he seems very fair. He is also very just as he treats Calpurnia with respect even though she is a Negro. He stands as a man of reason and courage, and tries to make his children be the same, to use one's head instead of their fists, or even worse. You learn that Atticus has a strong belief in equality of people, whether they are a different race or not, before the law ...read more.