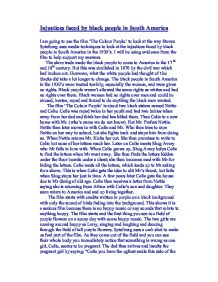 I am going to use the film 'The Colour Purple' to look at the way Steven Spielberg uses media techniques to look at the injustices faced by black people in South America in the 1930's.

Injustices faced by black people in South America I am going to use the film 'The Colour Purple' to look at the way Steven Spielberg uses media techniques to look at the injustices faced by black people in South America in the 1930's. I will be using evidence from the film to help support my answers. The slave trade made the black people to come to America in the 17th and 18th century. But this was abolished in 1870 by the civil war which had broken out. However, what the white people had thought of the blacks did take a lot longer to change. The black people in South America in the 1930's were treated terribly, especially the women, and were given no rights. Black people weren't allowed the same rights as whites and had no rights over them. Black women had no rights over men and could be abused, beaten, raped and forced to do anything the black men wanted. The film 'The Colour Purple' is about two black sisters named Nettie and Celie. Celie was raped twice in her youth and had two babies taken away from her dad and think her dad has killed them. Then Celie to a new home with Mr. (who's name we do not know). ...read more.

In the second key scene shows Celie and Nettie running around in the garden of Mr, who is reading his paper. He then looks up and blanks out Celie with his paper and watches Nettie. The scene then changes to follow Nettie down a country road with books in her hand. The audience picks up the impression that Nettie is on the way to school. Then we see Mr riding up beside her on his horse. The road then splits into two and goes around a group of trees. Nettie goes around one side and Mr going the other side. They can just see each other through the trees. The shots used by Spielberg are more crab shots so we can see the view points of each of the characters eyes. Nettie can see Mr smiling through the trees and becomes scared so walks faster, almost to a jog. She looks over again and just sees the horse with no Mr as the rider. The paths then meet up again and Mr is not on the horse or visible to Nettie. He pops out behind Nettie out of the trees laughing. He removes his hat and flower petals fall out. All these visual clues give us the impression that Nettie is going to be raped by Mr. ...read more.

Red has been chosen to symbolise danger. Then Mr's children run past and tell Shug, Celie is giving Mr a shave. She immediately realises the danger and runs back to the house in time to stop Celie from killing Mr. Spielberg uses the techniques well by switching between the two countries; zooming in on both the tribe's child's face and Mr's neck, and also Shug sprinting to the house in time. This technique is a excellent way to build the tension, and is doubled by the help of the music becoming quicker and quicker, until contact is made on the boys face. The camera is then flicked to Mr's still face, as if he has been killed. Then the camera is pulled out in order to see Shug holding Celie's arm back with the razor in her hand. In conclusion, I think Spielberg has created the drama and excitement needed to portray the injustices of black people in South America in the 1930's, by using the camera angles and music to his advantage. The injustices portrayed successfully are that of: * Women not allowed to keep their children * Women getting raped and beaten And * African countries having to suffer to the expense to white European nations. Overall Spielberg has created a very successful film by using many different camera angles and the use of music to produce the film. ...read more.