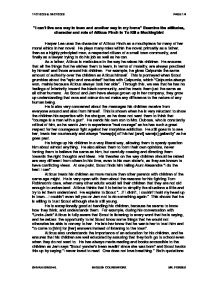 &quot;I can't live one way in town and another way in my home&quot; Examine the attitudes, character and role of Atticus Finch in To Kill a Mockingbird

"I can't live one way in town and another way in my home" Examine the attitudes, character and role of Atticus Finch in To Kill a Mockingbird Harper Lee uses the character of Atticus Finch as a mouthpiece for many of her moral ethics in her novel. He plays many roles within the novel; primarily as a father, then as a highly principled man, a respected citizen of a small town community, and finally as a lawyer trying to do his job as well as he can. As a father, Atticus is meticulous in the way he raises his children. He ensures that all the things that he wishes them to learn, in terms of morality, are always practised by himself and those around his children. For example, he gives Calpurnia the same amount of authority over the children as Atticus himself. This is portrayed when Scout grumbles about the "epic and one-sided" battles with Calpurnia, which "Calpurnia always won, mainly because Atticus always took her side". Through this, we see that he has no feelings of inferiority toward the black community, and he treats them just the same as all other humans. As Scout and Jem have always grown up in her company, they grow up understanding that race and colour do not make any difference to the nature of any human being. He is also very concerned about the messages his children receive from everyone around and also from himself. ...read more.

Atticus is respected all through Maycomb, by people from all the social statuses, for example at the end of the trial, when Atticus leaves, the entire black balcony show their respect for him by "getting to their feet" as their "father's passing". When the Finches return home they found "the kitchen table was loaded with food enough to bury the whole family" as tokens of appreciations from the black community. Many others within the community show Atticus a great deal of respect. For example, Judge John Taylor thinks so much of him that he "pointed at him and said "You're it"". Even within his community, although he is highly respected, he seems to represent a minority. He seems to be known for his controversial views as his "[being] chosen to defend that buy was no accident". This comment suggests that Judge Taylor knew that the greatest chance he could give Tom Robinson was to give him a lawyer like Atticus Finch, who would truly believe in his case and try to fight the case so thoroughly that Tom Robinson might have a chance for acquittal. Through the novel, although Atticus portrays many of Harper Lee's main ethical points, he does not reveal his real skills at his profession until almost the end of the book. We are given a miniscule glimpse of his "lawyer" side, when Jem realises "he had been done by the oldest lawyer's trick on records". ...read more.

was assassinated). Through the development of the novel, we are never told anything about Atticus's religious belief, except that he is a churchgoer. This is very interesting, as religion seems to be quite a controversial topic in Maycomb, with its many different churches. This shows that Atticus, although a religious man, is not blinkered or drawn into prejudice because of it. Although Atticus Finch is a good human being, he too, like all the others has his weaknesses; he cannot comprehend just how evil human beings can be. This is shown when he shrugs of Bob Ewell's threat that, "he'd get him if it took him the rest of his life." He refused to believe that Bob Ewell could pose him or his family danger and this ultimately turns out to be the cause of Jem's broken arm. Through the novel, I feel that Atticus Finch provides the solid base upon which Harper Lee builds her story and her develops her ideas. She expresses some intense emotions through him, both in what he says and does. He is a teacher, in many senses, he teaches his children about life, and how to live, his community about their own prejudices and injustices, and most importantly, he teaches us about our world by allowing us an insight into a microcosm in which the injustices are highly emphasised in his fight to eradicate them. ?? ?? ?? ?? 17/01/2005 to 24/07/2008 PAGE 1/4 SHIVANI SINGHAL ENGLISH COURSEWORK MR. FORBES ...read more.