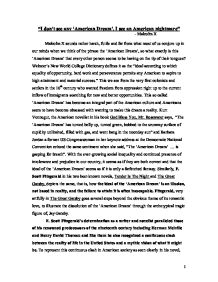 "I don't see any 'American Dream'. I see an American nightmare" - Malcolm X Malcolm X sounds rather harsh, futile and far from what most of us conjure up in our minds when we think of the phrase the 'American Dream', so what exactly is this 'American Dream' that every other person seems to be having on the tip of their tongues? Webster's New World College Dictionary defines it as the "ideal according to which equality of opportunity, hard work and perseverance permits any American to aspire to high attainment and material success." This we see from the very first colonists and settlers in the 16th century who wanted freedom from oppression right up to the current inflow of immigrants searching for new and better opportunities. This so called 'American Dream' has become an integral part of the American culture and Americans seem to have become obsessed with wanting to make this dream a reality. Kurt Vonnegut, the American novelist in his book God Bless You, Mr. Rosewater says, "The 'American Dream' has turned belly up, turned green, bobbed to the scummy surface of cupidity unlimited, filled with gas, and went bang in the noonday sun" and Barbara Jordan a former US Congresswoman in her keynote address at the Democratic National Convention echoed the same sentiment when she said, "The 'American Dream' ... ...read more.

(121) The idealistic characteristics of Gatsby and his aspirations allow Fitzgerald to define his views on the 'American Dream'. Here we see Gatsby as being a model example of the 'American Dream' - a self-made success, where he had created not only a new personality for himself but had succeeded both financially and socially. However, in his zealous pursuit of the 'Dream', Gatsby climbed to a solitary, isolated and alienated place in society where he finds himself alone with his 'Dream' and ambitions. His primary shortcoming, which would eventually lead to his own downfall, was his sole focus on regaining Daisy and reliving the past so much so he was willing to sacrifice his other aspirations, such as, improving himself. Through this quote we observe Gatsby's disappointment after his first encounter with Daisy. Fitzgerald through his tone and characterization clearly expresses his view on how the 'American Dream' for attaining material success was not fully based on reality. He portrayed the 'American Dream', as an illusion within our own minds - something that we think is attainable, achievable, and realistic but we, like Gatsby, can actually never attain it and this so called 'Dream' remains allusive or just out of our reach until our resignation to failure. ...read more.

Steven Spielberg, one of the greatest film directors of our time, once said, "Failure is inevitable. Success is elusive." F. Scott Fitzgerald was thinking the same way when he wrote The Great Gatsby with the ambition to write "The Great American Novel", and he has succeeded to some extent. Jay Gatsby's dream can be identified with that of America herself with its emphasis on drive, determination and goal orientation. But with the death of Gatsby, we observe the possible destiny of America and the 'American Dream' and Fitzgerald does not fail to continuously remind us that the 'American Dream' is an illusion and an unrealistic goal to be met and we will surely fail if we try to attain it but yet he prides on the supplementary parts of the 'American Dream' such as goodness, vitality and openness to life. F. Scott Fitzgerald's views on the American Dream can similarly be summed up by a quote by the current President of India, APJ Abdul Kalam who during his inaugural speech said, "Let us dream ... dream about our future. Dream ... knowing that getting as close to it as humanely possible is more than enough to make us great." 1 ...read more.