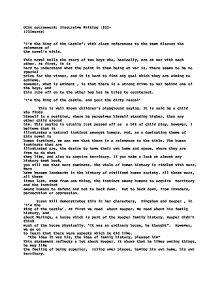 &quot;I'm the King of the Castle&quot; - with close references to the text discuss the relevance of the novel's title.

GCSE coursework: Discursive Writing (800- 1200words) "I'm the King of the Castle": with close references to the text discuss the relevance of the novel's title. This novel tells the story of two boys who, basically, are at war with each other. At first, it is hard to understand what the point in them being at war is. There seems to be no special prize for the winner, and it is hard to find any goal which they are aiming to achieve. However, what is evident , is that there is a strong drive to war behind one of the boys, and this rubs off on to the other boy has he tries to counteract. 'I'm the king of the castle... and your the dirty rascal' This is well known children's playground saying. It is said by a child who finds himself in a position, where he perceives himself standing higher, than any other child around him. This saying is usually just passed off as a bit of child play. However, I believe that it illustrates a natural instinct amongst humans. ...read more.

Hooper views Kingshaw as a threat- a person who could take from him. Kingshaw finds a piece of paper, upon which was written in bold capital letters . "I DIDN'T WANT YOU TO COME HERE ". From here on , Hopper treats Kingshaw with disdain and resentment. We learn that Hooper confronts his unwanted guest , 'Hooper said, " why have you come here?" ' By saying this Hooper strongly suggests to Kingshaw that he is not wanted . Not only did he treat Kingshaw as an intruder into his house, Hooper also wanted to assert a superior position as the king of his castle . "'When my father dies,'... 'this house will belong to me, I shall be master'" The statements by Hooper to Kingshaw shows an clear relevance to the title of the book because effectively, Hooper is saying "I'm the king of the castle". 'I'm the king of the castle ,your the dirty rascal' this is also a game played by children. Hooper , sometimes seems as though he is playing games with Kingshaw, almost like he is using him as a toy, or scoring points every time Kingshaw is made to feel bad by him. ...read more.

Hooper also enjoyed drawing up plans for battles to defend his territory, for example, we learn that in Hoppers bedroom , " ' the battle charts with its coloured pins and flags and symbols , was propped up on its easel. On the table were Hooper's long lists of regiments..," '. We are reminded again that ownership of property , makes people like Hooper feel important, like a king in his castle, ready to defend at a moments notice. Conflicts and wars often start with fights by kings over the ownership of castles and territory . In conclusion the title of the book , remained relevant throughout the story ,through to the end , when Hooper eventually got the better of Kingshaw , who in the end took his own life. Even then Hooper saw this incident as a triumph, just as a king in his castle might do , if he had won a victorious struggle. We read that Hooper discovers Kingshaw had died , and then " ' Hooper thought suddenly , it is because of me , and a spurt of triumph went through him" '. 1181 words ...read more.

This essay begins to make some good points about conflict and how this is used as an important theme in the novel; however the structure of the response needs to be planned more carefully so the interpretations being explored are communicated more effectively.