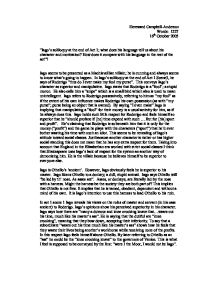 &quot;Iago's soliloquy at the end of Act 1; what does his language tell us about his character and motivation? How does it compare with his language in the rest of the act&quot;?

Hereward Campbell-Anderson Words: 1227 16th October 2005 "Iago's soliloquy at the end of Act 1; what does his language tell us about his character and motivation? How does it compare with his language in the rest of the act"? Iago seems to be presented as a Machiavellian villain; he is cunning and always seems to know what's going to happen. In Iago's soliloquy at the end of Act 1 Scene3, he says of Roderigo "thus do I ever make my fool my purse". This conveys Iago's character as superior and manipulative. Iago states that Roderigo is a "fool"; a stupid moron. He also calls him a "snipe" which is a small bird which also is used to mean unintellegent. Iago refers to Roderigo possessively, referring to him as "my fool" as if the extent of his own influence makes Roderigo his own possession (as with "my purse"; purse being an object that is owned). By saying "I even make" Iago is implying that manipulating a "fool" for their money is a usual activity for him, as if he always does this. Iago holds such little respect for Roderigo and feels himself so superior that he "should profane if [he] time expend with such ... ...read more.

In this respect Iago feels himself above Othello. By later referring to Othello as an "ass" he could be the "knee crooking knave" to the governors of Venice. This is what I feel is supposed to be conveyed by the line: "were I the Moor, I would not be Iago". Iago is resentful of the lack of recognition he has received from his society. I would say that Iago has motivation against his society. He misses out on promotion and Cassio takes the position. He resents Cassio for being better educated and of higher social standing. From scene 1 Iago says "I know my price, I am worth no worse a place" when telling Roderigo of being passed over for promotion. I think that Shakespeare has Iago say this because he's supposed to be resentful of the lack of recognition he's received. By saying "I know my price" he is also saying that no-one else perceives his worth. Iago mentions that Cassio is "a Florentine" while disrespectfully describing him. That Shakespeare has Iago mention this means that it is relevant. Perhaps that Iago disapproves of a Florentine being promoted in a Venetian army shows he has a kind of respect for the society he's in. ...read more.

Iago alarms him by conjuring bestial imagery. Bestiality is sacrilegious, which a few hundred years ago was more important than it is now. Perhaps this sacrilegious imagery influenced Brabantio to rationalise his daughter's behaviour as witchcraft. Shakespeare presents Iago as an effective liar. This must be the case as Othello refers to him in Act one as "Honest Iago". He also describes him as "a man he is of honesty and trust". Despite Iago keeping Roderigo's presents to Desdemona for himself he still can convince him of his trustworthiness. When reassuring Roderigo he says "I have professed me thy friend, and I confess me knit to thy deserving with cables of perdurable toughness". By claiming that he is Roderigo's 'professed' friend and that he's prepared to help him with everlasting strength he convinces of his honesty. Iago also successfully manipulates Roderigo by repeatedly suggesting (instructing really) to "put money in thy purse" so as he can take it from him. Iago repeats this six times. Iago also convinces Roderigo to do his biddings by distracting him with his philosophies; "Our bodies are our gardens, to which are wills are gardeners". In this speech Iago basically turns Roderigo's loss into his own gain. ...read more.