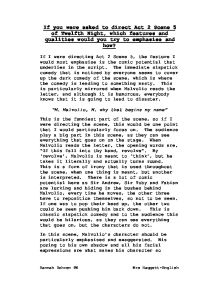 If you were asked to direct Act 2 Scene 5 of Twelfth Night, which features and qualities would you try to emphasise and how?

If you were asked to direct Act 2 Scene 5 of Twelfth Night, which features and qualities would you try to emphasise and how? If I were directing Act 2 Scene 5, the feature I would most emphasise is the comic potential that underlies in the script. The immediate slapstick comedy that is noticed by everyone seems to cover up the dark comedy of the scene, which is where the comedy is leading to something nasty. This is particularly mirrored when Malvolio reads the letter, and although it is humorous, everybody knows that it is going to lead to disaster. "M. Malvolio, M. why that begins my name" This is the funniest part of the scene, so if I were directing the scene, this would be one point that I would particularly focus on. The audience play a big part in this scene, as they can see everything that goes on on the stage. When Malvolio reads the letter, the opening words are, "If this fall into thy hand, revolve". ...read more.

The only way that Maria, Sir Andrew, Sir Toby and Fabian look upon this prank is as a way to get revenge upon Malvolio for being such a Puritan and pompous. I think that it is a case of not knowing when to stop, as Maria and the others are prepared to go as far as they have to to get revenge, and not really considering the outcome of it all. Throughout the scene, the dark comedy is used as a contrast to the slapstick comedy. "Jove I thank thee, I will smile, I will do everything that thou wilt have me". "I will not give my part of this sport for a pension of thousands to be paid from the Sophy". Another of the elements that I would emphasise is the build up of comic anticipation. When Malvolio is reading the letter, the comedy is built up so that everyone, except the characters themselves, knows what is about to happen, but not when. ...read more.

Sir Andrew plays a big part in the humour of this scene, as he just seems to copy or agree with whatever Sir Toby says. This makes him seem weak and a fool, although he already knows it. (Sir Toby) Wilt thou set thy foot o' my neck? (Sir Andrew) Or o' mine either? Although Maria is the one is the one who wrote the letter, her part in this scene is not that big. What part she does have, seems to be of her being evil and not caring about Malvolio's feelings. This should be shown when it is being acted out. Fabian does not have a great part in this scene either. He just seems to be there for the sake of watching Malvolio make a fool of himself. In conclusion, I would say that this scene has a lot of comic potential and slapstick comedy, that when being directed needs to be brought out for it to achieve it's full humour. But the dark comedy of the scene also has to be put across well so that the scene is fully understood. Hannah Dohren 9W Mrs Haggett-English ...read more.