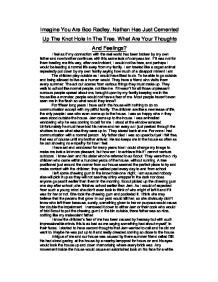 Imagine You Are Boo Radley. Nathan Has Just Cemented Up The Knot Hole In The Tree. What Are Your Thoughts And Feelings?

Imagine You Are Boo Radley. Nathan Has Just Cemented Up The Knot Hole In The Tree. What Are Your Thoughts And Feelings? I feel as if my connection with the real world has been broken by my own father and now brother continues with this same lack of compassion. If it was not for them treating me this way, after one incident, I would not be here, and perhaps I would be leading a normal life away from my family. I am treated like a caged animal repeatedly put down by my own family saying how much of a disappointment I am. The children play outside as I would have liked to do. To be able to go outside and being allowed to live as a human would. They have a friend who visits them every summer. The act out scenes from various things they must make up. They walk to school like normal people, not like me. If it wasn't for all those unpleasant rumours people spread about me, brought upon by my family keeping me in the house like a monster, people would not have a fear of me. Most people haven't even seen me in the flesh so what would they know? ...read more.

These Indian heads had a surreal sense of magic and were meant to protect you and bring you good luck. Their friend arrived to come and stay with them a few days after I had left them the coins. He and Jem would stick together as a pair and talk and play occasionally with the sister. She seemed to be not as close to Jem when this boy was around. I would watch them do there plays and act and pretend to be other people Jem seemed to be able to adapt to any role they gave him. They were so happy doing this, not a care in the world, nothing like me; all I wanted to do was to be with them. Several days late I was horrified to see they were re-enacting a tale they had obviously heard about me. They depicted me as a wicked, evil werewolf. They acted the tale that I rammed a pair of scissors into my mother's leg. This story was derived from when my crazy mother ran out of the house screaming "he's killing them all," the sheriff visited as somebody had reported a disturbance my father and me managed to calm her down before the sheriff arrived. ...read more.

I feel Jem knew these were replicas of the children but did not want to admit it. I left another pack of chewing gum trying to get into their heads that perhaps they should try and make contact with me again there is no way I could do it. Nathan would kill me. The following week I showed them that I had achieved something beyond the odds. I gave them my spelling medal, even now I would look at it in my cabinet and take pride that I had won that medal. Then I wondered how I managed to become what I am today, a local horror story. I found my watch. I then gave them my watch, Nathan would not buy batteries for me, and I hated him with all my feelings. My pocket knife I also gave to them, the one I carved their figures out of in soap. This relationship was so close to being a final encounter. Finally maybe I would meet them and speak and talk. Just like normal people do. Then Nathan committed the most unforgivable crime, he blocked up the knot hole. My only means of communication one night it was there the next, banished for eternity. I vowed never to make contact with him again. And until my dying day I will not go back on my word. ...read more.