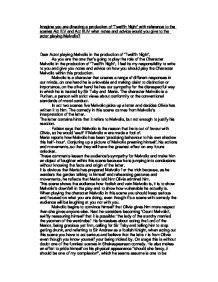 Imagine you are directing a production of 'Twelfth Night' with reference to the scenes Act II.V and Act III.IV what notes and advice would you give to the actor playing Malvolio?

Imagine you are directing a production of 'Twelfth Night' with reference to the scenes Act II.V and Act III.IV what notes and advice would you give to the actor playing Malvolio? Dear Actor playing Malvolio in the production of 'Twelfth Night', As you are the one that's going to play the role of the Character Malvolio in the production of 'Twelfth Night', I feel its my responsibility to write to you and give you notes and advice on how you should play the Character Malvolio within this production. Malvolio is a character that creates a range of different responses in our minds, on one hand he is unlovable and making claim to distinction or importance, on the other hand he has our sympathy for the disrespectful way in which he is treated by Sir Toby and Maria. ...read more.

These comments lessen the audience's sympathy for Malvolio and make him an object of laughter within this scene because he is jumping into conclusions without knowing the facts and origin of the letter. It is obvious that Maria has prepared Malvolio for the trick because, as he wanders the garden talking to himself and rehearsing gestures and movements, he reflects that Maria told him Olivia admired him. This scene shows the audience how foolish and vain Malvolio is, it is to show Malvolio's downfall in the play and to show how vulnerable he actually is. When playing the character Malvolio in this scene you should keep serious and focused on what you are doing, even though it's a scene with comedy the audience will be laughing at you not with you. ...read more.

is one to be admired, you have to think of yourself as being higher than all the other actors and more admired by Olivia in your imagination. The letter which we know is written by Maria but Malvolio believes its written by Olivia refers to each of Malvolio's character weaknesses and ensures that he is fooled by its meanings, the character Malvolio is being put down by everyone because he thought so highly of himself but ended getting played as a fool by everyone. Towards the end of the play we are shown how Malvolio reaches in farcical high point as he deludes himself in his vain and self deceiving and sets about being rude to everyone, it is the last time we can enjoy his suffering without feeling an element of sympathy towards him. ...read more.