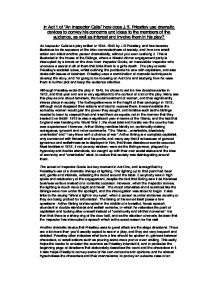 In Act 1 of An Inspector Calls how does J.B. Priestley use dramatic devices to convey his concerns and ideas to the members of the audience, as well as interest and involve them in his play?

In Act 1 of "An Inspector Calls" how does J.B. Priestley use dramatic devices to convey his concerns and ideas to the members of the audience, as well as interest and involve them in his play? An Inspector Calls is a play written in 1944-1945 by J.B Priestley, and has become illustrious for its exposure of the inter-connectedness of society, and how one small action can affect another person dramatically, without you even realizing it. This is illustrated in the house of the Birlings, where a blissful dinner engagement party is interrupted by a knock on the door from Inspector Goole, an inscrutable Inspector who uncovers a secret in all of them that links them to a girl's death. The play reveals Priestley's socialist views, whilst outlining the problems he saw with capitalism, and also deals with issues of feminism. Priestley uses a combination of dramatic techniques to develop the story, and I'm going to be focusing on Act One and studying how he uses them to further plot and keep the audience attentive. Although Priestley wrote the play in 1945, he chose to set it a few decades earlier in 1912, and that year and era is very significant to the context of a lot of the play. ...read more.

country descended into the "war to end all wars" Priestley utilizes this particularly in Act One, and in fact the majority of words that come out of Arthur Birling's mouth are ironic in retrospect. He and the audience become one in laughing at their stupidity, but feeling a twang of pity for a family who, however selfish, have no idea of the horrors to come. Some of the audience may also be able to relate to a similar scenario, being so conceited and ignorant. "We're in for a time of steadily increasing prosperity" is an idea that is echoed throughout the play. One positive moral message that Priestley communicates through this play, is that through all the disasters that passed in those few decades, at least the country has pulled itself together, and is rid of a lot of the double standards and inequality that existed in the time of the play. The audience of 1945 may have forgotten just how dire the treatment of women was, and whilst laughing at the irony of the play, they will also be glad that scenarios like those do not present themselves anymore. Frequent irony is also displayed in Act One in the timely entrances and exits of the characters. ...read more.

In this way, the Inspector could also be a seen as a voice of all their consciences combined, guiltily confessing to all their wrongdoings. Priestley creates similar mystery around Eva Smith. He builds up tension, and there becomes almost this taboo around her name, as their guilt and pity grows. Priestly also makes it very dramatic and unsettling, as they retraced her last movements and see how each of them had intervened at one point, it almost becomes a murder investigation. The audience is kept absorbed, as it seems the incidents become worse as the play prevails. In conclusion, Priestley entwines multiple dramatic techniques and devices to make An Inspector Calls a gripping and ethical play, exploring moral standards and people's tendency to be blindingly ignorant and selfish, often at other's expense. It is a moral tale, and the Inspector acts as the embodiment of justice, teaching us all that even seemingly insignificant actions can have detrimental effects. Priestley uses dramatic irony in great abundance, as it engages the audience and allows them to laugh a little at the ignorance and naivety that infested England at that time. Priestley also uses the benefits of a theatrical production, and uses the lighting, exits, entrances and stage directions to further plot and reveal more about characters, and underlying themes of the play. ...read more.