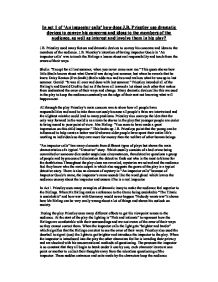 In act 1 of 'An inspector calls' how does J.B. Priestley use dramatic devices to convey his concerns and ideas to the members of the audience, as well as interest and involve them in his play?

In Act 1 Priestley uses many examples of dramatic irony to make the audience feel superior to the Birlings. When Mr.Birling makes a reference to the titanic being unsinkable "The Titanic is unsinkable" and how war with Germany would never happen "Nobody wants war" it shows how Mr.Birling can be very easily wrong about a lot of things and shows his outlook on society. During the play Priestley uses many different effects to get his viewpoint across to the audience. At the start of the play the lighting is "Pink and intimate" to represent how the Birlings are comfortable with their surroundings and are not aware of the error of their ways so they cannot correct them. When the inspector calls the light gets "brighter and harder" which signifies that the Birlings can start to see the error of their ways. Priestley also used the doorbell to signal (cue) the lights to get brighter and introduce the inspector to the play. When the inspector is introduced into the play the other characters feel he is invading their privacy and are shocked with his unconventional methods of questioning. ...read more.

This affects the audience beacause it becomes very dramatic and tense when the inspector arrives and starts breaking up barriers between the family and it also keeps the audience interested and focused on the play. In Act one J.B. Priestley shows what society's view on women was at the time and shows how unfair men were to women for example Mr.Briling and Gerald stay in the dining room to discuss manly things such as money, business and politics while the women leave to talk about clothes, makeup ect this shows how men think that all women should be dumb and good looking and not be able to talk about deep issues such as politics or buisness. By using a series of dramatic devices J.B. Priestley convey's his message that everyone has responsibility and needs to remember that so they can choose to do the right thing rather then do the bad thing and ruin someone's life. This message is still relevant today and always will be because everyone has a lot of responsibility to uphold and have to consider the needs of other people as well as their own needs. ?? ?? ?? ?? ...read more.