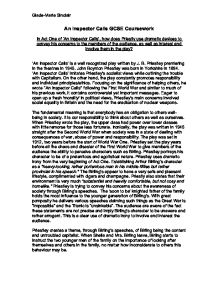 In Act One of An Inspector Calls, how does Priestly use dramatic devices to convey his concerns to the members of the audience, as well as interest and involve them in the play?

An Inspector Calls GCSE Coursework In Act One of 'An Inspector Calls', how does Priestly use dramatic devices to convey his concerns to the members of the audience, as well as interest and involve them in the play? 'An Inspector Calls' is a well recognized play written by J. B. Priestley premiering in the theatres in 1945. John Boynton Priestley was born in Yorkshire in 1894. 'An Inspector Calls' imitates Priestley's socialist views while outlining the trouble with Capitalism. On the other hand, the play constantly promotes responsibility and individual principles/ethics. Focusing on the significance of helping others, he wrote ''An Inspector Calls'' following the First World War and similar to much of his previous work, it contains controversial yet important messages. Eager to open up a fresh 'morality' in political views, Priestley's main concerns involved social equality in Britain and the need for the eradication of nuclear weapons. The fundamental meaning is that everybody has an obligation to others well-being in society. It is our responsibility to think about others as well as ourselves. When Priestley wrote the play, the upper class had power over lower classes with little remorse for those less fortunate. ...read more.

These devices interest the audience, causing them to be curious as to what truth will be revealed in this scenario, and also involve the audience leading them to reflect on anything it is that they may cover and how they can change. The doorbell is used as a sound effect. This is dramatically effective because the piercing, sharp sound of the doorbell instantly focuses the effects of the Birling's shell of intimacy is being split. Priestley uses the Inspector as the mouthpiece through which he expresses his concerns and opinions. Priestley states that the Inspector automatically 'creates an impression of massiveness'. By using this stage direction, he is implying that anybody, regardless of size, can have a powerful impact on those superior on the social hierarchy. He immediately takes on a moralistic manner, and maintains breaking down the characters from the very beginning. By doing this, thereafter it is evident that the duration of Birling's speeches decrease rapidly, therefore it is apparent that the Birling's feel intimidated and threatened by the Inspectors interrogation. The Inspector is the voice of principle and decency in the play, one of the plays essential themes which is stressed is that there should be no segregation is society as we are all equal. ...read more.

You'll see." Priestley is voicing through Sheila how we all deny our weaknesses to ourselves and each other, like the Birling's, we feel a false sense of superiority, an attitude that needs to be excluded from today's society. This is the Act when the Inspector begins to strip away their cloak of respectability, which is observed by the younger generation of Birling's but the elder Birling's are oblivious to the device. Priestley involves the audience through these dramatic devices in making them feel like it is not just the Birling's that are on trial. The whole society is. In closing, I feel that the range of messages and themes that Priestley implicated throughout the play are still extremely relevant to today's society and can constantly be used to improve us as citizens. Priestley used a choice of dramatic devices to convey his concerns about equality and how it should be viewed upon by the public. I feel that my opinion of Capitalism changed during the play and I was also interested and involved by the many scenarios Priestley placed the Birling's in. Priestley's use of interrogation through the Inspector made me think about society in a whole different light. Consequently, Priestley's intentions have been accomplished, to me at least. ?? ?? ?? ?? Glade-Marie Sinclair ...read more.