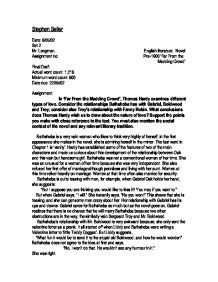 In 'Far From the Madding Crowd', Thomas Hardy examines different types of love. Consider the relationships Bathsheba has with Gabriel, Boldwood and Troy; consider also Troy's relationship with Fanny Robin.

Stephan Seiler Date: 8/05/02 Set 2 Mr. Longman English literature: Novel Assignment no: Pre-1900 'Far From the Madding Crowd' Final Draft Actual word count: 1,216 Minimum word count: 600 Date due: 22/05/02 Assignment: In 'Far From the Madding Crowd', Thomas Hardy examines different types of love. Consider the relationships Bathsheba has with Gabriel, Boldwood and Troy; consider also Troy's relationship with Fanny Robin. What conclusions does Thomas Hardy wish us to draw about the nature of love? Support the points you make with close reference to the text. You must also mention the social context of the novel and any relevant literary tradition. Bathsheba is a very vain woman who likes to think very highly of herself, in the first appearance she makes in the novel, she is admiring herself in the mirror. The last word in Chapter 1 is 'vanity'. Hardy has established some of the features of two of the main characters and made us curious about this development of the relationship between Oak and this vain but handsome girl. Bathsheba was not a conventional woman of her time. She was an unusual for a woman of her time because she was very independent. ...read more.

Make me think it was something more - that it was a sort of prophetic instinct - the beginning of a feeling that you would like me." Then Troy comes into the novel. During that period of time, there were strict rules governing the etiquette of behaviour about men and women being alone together and they certainly would not publicly touch each other or their clothes. This makes their meeting highly irregular. Bathsheba would be particularly vulnerable in this situation. Troy is similarly vain and teasing like Bathsheba, this enchants her, "Thank you for the sight of such a beautiful face!" He also often repeats the word, "Beauty" aimed obviously at Bathsheba. When they depart after their first 'encounter', she is very happy and feels flattered. She looks in the mirror (as usual) and repeats Troy's words, "Goodnight ... beauty!" Bathsheba is aware of her beauty, and she feels that if some handsome man in uniform compliments her on her looks, then that is very rewarding for her and it boosts her self-confidence. Also, Troy's showmanship with his sword swept Bathsheba off her feet. ...read more.

Troy's reaction to her death and his disregard for Bathsheba shows he is the type of man who only wants what he cannot have. When Fanny was alive, Troy showed little interest in her predicament. I think that the message Thomas Hardy is trying to get out is that love can only be true, not just for jokes and pranks (the valentines letter.) Love also has to have two people involved not like Fanny Robin and Troy at the start of the novel. In conclusion, Hardy ended the novel happily, because he knew that is what the readers wanted to read. The story was printed into a monthly magazine and for a Victorian readership; a happy end involved a marriage. Bathsheba was first attracted by Troy's good looks and superficial charm and preferred these qualities to the more traditional ones of security and love offered by Oak and Boldwood. But when Fanny dies, Bathsheba finally realizes that Troy's is actually a womanizer and he is disloyal. Hardy, himself did not rate marriage very highly as he had an unhappy marriage. So by the end of the novel, Bathsheba becomes more sensitive to others and realizes that she should have accepted Oak's initial proposal, rather than Troy's, and that she would have been much happier with Oak. ...read more.